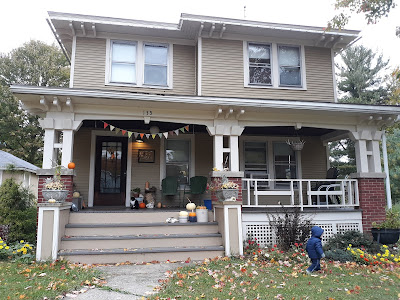 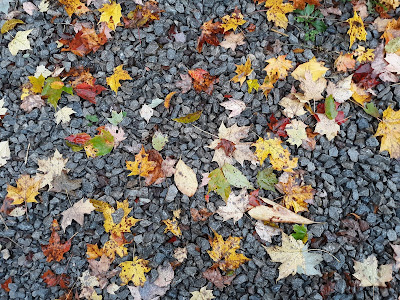 We've been outside everyday and the weather has been crazy.  It was really warm today but earlier this week cold and rainy and we all needed mittens. 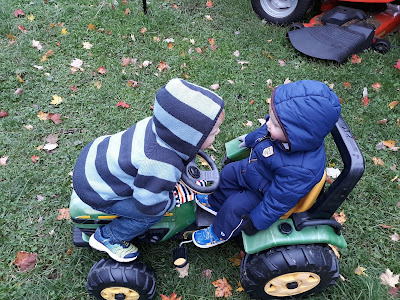 On the cold day the youngest was so bundled up that when he fell into a flower bed he could just lay there on his back waving his little arms and legs until I rescued him. It's been great though. The oldest and I pulled the spent Jerusalem artichokes (taller than the garage!), leveled ground, put down pallets and stacked wood.  I have also been working on stripping the veneer off of the crappy back door, which we have lived with since buying the house, so my husband can paint it and install a kick plate before winter. We're going to call it "done and good enough" until spring. 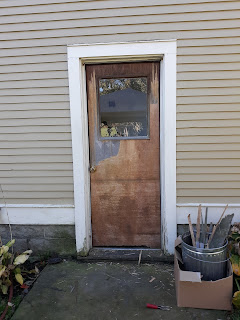 It's kind of pretty like this, but we can't keep it. When it's done we'll wonder what on earth took us so long.

I've made an appointment to take some old laying hens to the butcher tomorrow,  only 3 which still leaves me with way too many birds. 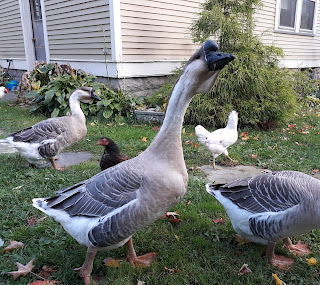 These goofballs are safe from the freezer.  They're awesome. 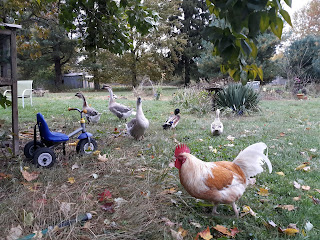 Popcorn the rooster has turned out to be sort of a stinker.  He hasn't spurred anyone yet but he's working up to it.  He regularly rushes me and the kids and is met with my boot.  I would send him to the butcher too but promised I'd contact the woman we got him from if it "didn't work out". It's not working out and I called yesterday and left a message asking what she would like to do with him*. Usually we would just take care of this problem ourselves but will drive him back across town if she wants him back. 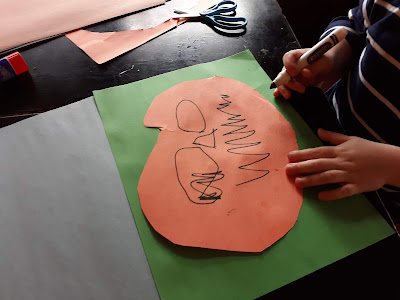 We've been making Halloween decorations.  I need to go to the fabric store for material for their costumes tomorrow, they are both being parrots.  The other options that were discussed were the oldest being a forklift with the little one as a box and the oldest being an octopus with the youngest as a clam but having them both as parrots seems much more dignified. 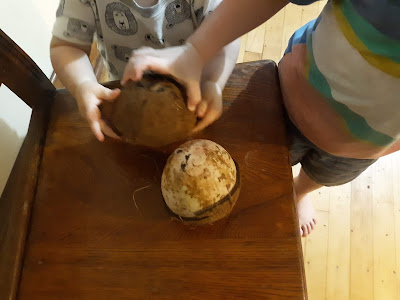 The oldest has been discussing the book Chicka Chicka Boom Boom at pre-school so I went out and bought a coconut awhile back.  We read the book, looked at the coconut and discussed it and then I put a hole in the eye and we sampled the coconut milk.  Then we opened the nut with a hammer and talked about that and tried the coconut meat.  The coconut milk and meat are in the freezer now, we'll use them for baking at some point. 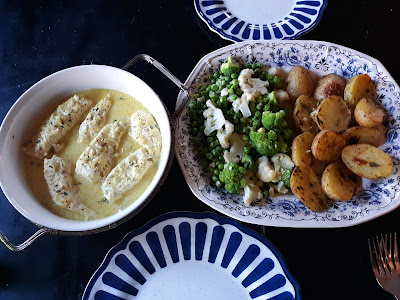 We had walleye with mustard sauce again tonight.  Here's the link to the recipe.  I'm not sure what the difference is but it was much tastier this time when we made it.  I think having the broccoli and peas to go with it helped.

* I just talked to Popcorn's previous owner and she said without hesitation that she absolutely wants him back if we can't keep him. So Popcorn is in luck. It's a shame really, he's so pretty.

Posted by Cottontailfarm at 8:50 PM