What we found in the woods 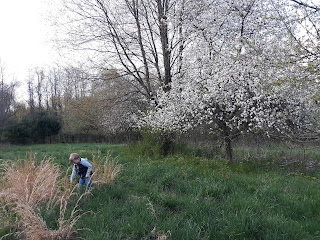 What a beautiful weekend. Especially after the suprise snow this week.  We are lucky that even after two days of snow and freezing temperatures the trees did not lose their flowers.  The oldest and I took a long walk out back yesterday. 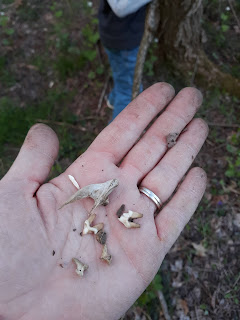 We found some teeth and claws that I was missing from the red fox skeleton I'm articulating.  Very, very slowing articulating. 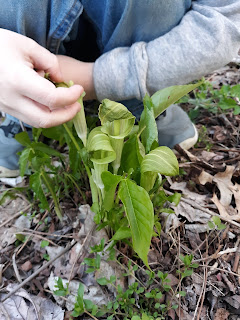 We found this green Jack in the Pulpit. There is a little cluster of them. I was absolutely thrilled having never seen this plant before! Morels are up! There are 8 groups of mushrooms out by the shed. I marked them with sticks because they are TINY. Must have just come up overnight.  Asparagus is up too, barely. 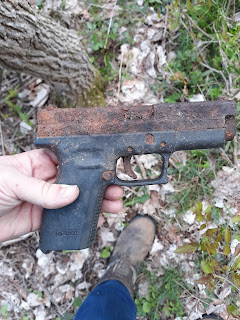 And we found this out by the back property line. Yep.
I wasn't sure exactly what I was holding but a quick Google tells me it's a 9 mm handgun made in Croatia in 1999 and used in the Iraq War. What the actual crap.  The clip is missing. It was sticking out of a pile of leaves back by the old dump (apparently no one living here before us had garbage pick up. It's disgusting) I called the non-emergency police line today and two officers came out to tag it and ask some questions.
So that has been our weekend thus far. A row in the garden has been tilled. The kids and I will put up a fence and plant snow peas tomorrow.
I've been missing because this last couple of weeks have, frankly, sucked. It started two weeks ago when the baby fell sick over the weekend. Baby P. vomited for 8 hours straight, many calls were made to the after hours line. Then slowly the rest of the house got it. Hours of vomiting. All except me. Who was playing nurse, cooking, so much laundry and by Thursday night had apparently had enough.  My body reacted by having a full blown panic attack, complete with hallucinations before and after.  I've never felt that frightened.
I had 5 more of these episodes on Friday.  It happened twice in a row in the morning when I was alone with 2 kids.  I ended up calling my dad hysterical and babbling nonsense until he came over. My husband came home from work. It was terrifying and left me disoriented. My PCP said I sounded exhausted, especially as there was a night where I was up with Mr. A from midnight until noon the next day.  She may have a point. I'm too old for this kind of thing. I now have a prescription for a PRN anxiety medication, am taking it daily  but am feeling mostly better.
I keep thinking of a line from Charles Bukowski which is this: 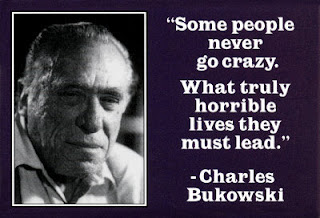 I can safely say I've tried it and am ready to move on.
Tomorrow is supposed to be a nice day. Here is hoping for some work done, some sunshine and maybe a nap thrown in.
Posted by Cottontailfarm at 10:43 PM 7 comments: