Sushi at home - the learning curve

So we've had sushi for dinner here periodically ever since I had the epiphany that you could roll it at home.  For the most part it has been an adventure that has been fun, delicious, and ridiculously inexpensive.  Today was my first sushi "fail".  I got the idea into my head that because we had some leftover basmati rice from earlier in the week I should make sushi.

To my international friends - let me say this is sadly "American" food in a nutshell; Indian on Monday, salmon patties (maybe American -from the Pacific NW) on Tuesday, Homemade pizzas (Italian) on Wednesday and tonight, sushi foolishly made with basmati rice.

It usually works.  Until it doesn't.

Here is some of the other sushi that I've rolled: 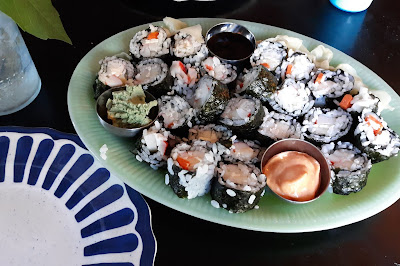 Win!  But sushi rice is sushi rice for a reason- it has a short grain and is rather glutenous and sticky.  Basmati is the opposite - a dry, long-grained rice.  Each grain stands proudly and individually from its neighbors.  Which makes for a lousy sushi roll as it does not roll properly or seal at the end when you are done rolling the seaweed sheet.

The rolls tonight were a slippery mess.  Usually I can make a kinda-tight roll but the basmati just was NOT having it. I tried to put them in the refrigerator to firm them up and it did work a bit. 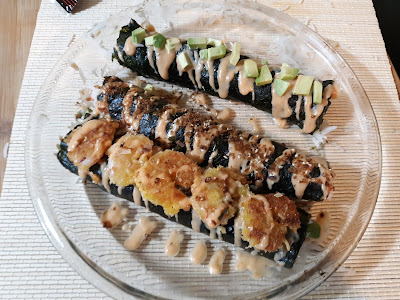 They did end up slicing fine with a sharp serrated bread knife after chilling.  They were delicious but messy. 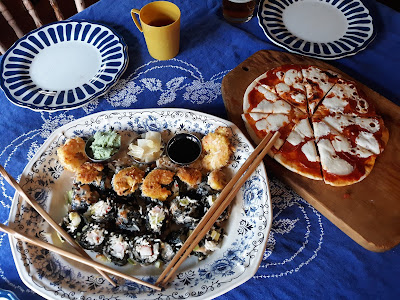 When I was at Giant Eagle today getting more seaweed sheets I took some photos of the sushi for sale and was surprised to see that it looked like basically the same combination of ingredients seasoned and presented in different way. 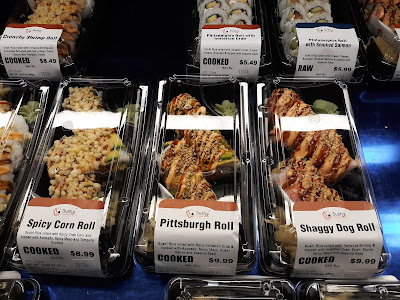 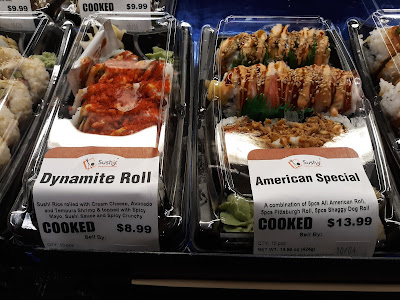 It was also a nice day in that I found 6 pairs of bamboo chopsticks at TJ Maxx for $4 and bought the blue and white serving platter at the thrift store for $3.

I think I need to look back on the time I spent learning to make pasta at home: hours watching Pasta Grannies on Youtube and practicing making shapes by hand after the kiddos were in bed.  That kind of time needs to be dedicated to learning the sushi process, at home, in my amateur way..  I mean, what we are eating here is damn good ( and CHEAP! I had NO idea how inexpensive this was to make) but nothing to serve to guests without a sense of humor.

Posted by Cottontailfarm at 7:00 PM