Last night I was sitting on the couch around 11 p.m. when there was a noise out on the porch; the unmistakable tinkling sound of someone knocking over the cat food dish.  The cats don't knock the dish over and they had finished eating earlier anyhow, so it wasn't them.  I crept to the door and pulled back the blind to reveal this:  A TINY FLUFFY LITTLE ANIMAL! perched on the watering can. 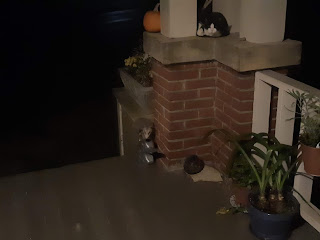 Bee is wearing her "BABIES!" face. Honestly, this is the same way she looks at people babies.

The tiny opossum was sitting on top of the little watering can with his head stuck in it trying to find a drink. We are all lucky it didn't get stuck like a cork in a bottle. 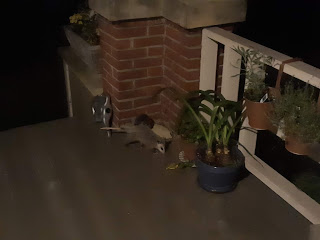 It did a little lap around the porch sniffing things, coming right up to the door and then scampered off.

This sighting led to the best conversation with the oldest, Mr. Naturalist, when he came downstairs this morning.
Me "Guess what kind of animal was out on the porch last night?"
Him: "WHAT?"
Me: "Hint: It's North America's only native marsupial."
Him: "WHAAAAT?!?!?!"

It was so very adorable because it was so tiny. They're also kinda cute when older but eat pretty much anything they find and these teeth and sagittal crest (high ridge on the back of the skull = biting power) are no joke: 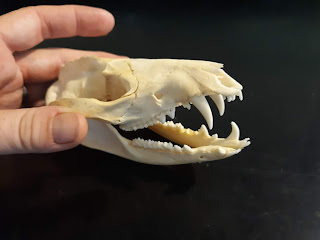 Still, I can't bring myself to kill one because, besides the fact that they eat ticks and they can't transmit rabies, they ARE marsupials and as such there's always a chance that the opossum might be a mama with tiny little babies she's carrying around in her pouch and nursing. Which would kill me. So, I am soft.  The little opossum brought me a lot of happiness last night, and this morning and we wish it well just far away from our chickens.

Posted by Cottontailfarm at 6:06 PM