There's been a lot going on in the kitchen. Mostly old, reliable stuff but also some new things prompted by boredom and cabin fever. 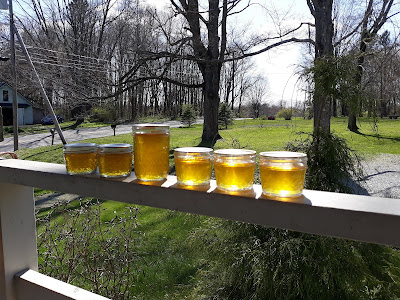 I made dandelion jelly for the first time. It's wonderful. The flavor is like honey with lemon. I did use a single drop of  *cough* food coloring *cough* to get that golden color. 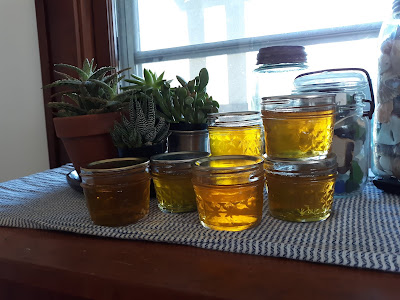 Add 1 cup petals (yellow part only) to 2 cups boiling water. Let this sit overnight to make a tea. Next morning discard the petals , add I tbsp lemon juice and half a box of powdered pectin to the tea. Bring to a boil. Add 2 cups sugar, bring back to a boil and boil for 2 minutes. Water bath can the filled jars for 10 minutes. This made 3 1/2 jelly jars worth. 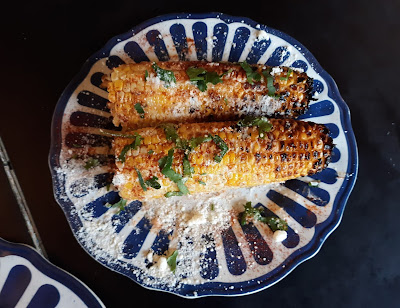 My husband made cheese burgers and corn on the grill last night. Because we had cilantro in the house we tried Mexican street corn for the first time. It was absolutely amazing and not spicy at all, actually kind of sweet.
After the corn comes off the grill brush it with mayonnaise,  sprinkle heavily with paprika and parmesan cheese, add cilantro and a squeeze of lime. We'll be having this regularly. 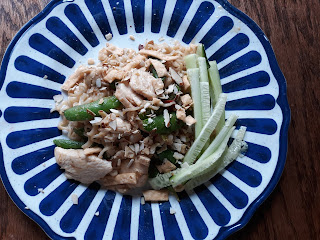 This doesn't look like much but it's a new favorite as well. I think the recipe came from Martha Stewart and involves making a Thai-style sauce (soy sauce, green onion, lime, maple syrup, peanut butter, ginger and chillies) and saucing ramen noodles with it. Such a good sweet/salty/savory flavor and the sauce can be whipped up while the noodles are cooking. The first time we had this it was with tofu but it's good with chicken too. 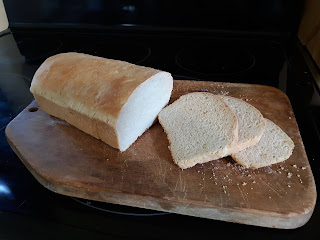 I've been making "Our Favorite Sandwich Bread" off of the King Arthur Flour website regularly.  It calls for scalding the milk. This is a very easy bread that slices nicely and has a dense, soft crumb. Husband and I like it a lot. Kids hate it because it doesn't taste like cheap fluffy white bread (which can also hit the spot) The heels of the King Arthur loaf can also made into excellent croutons.

We've been having both homemade pizzas and breakfast for dinner at least once a week for the last month. They're easy and everyone loves those meals. Using mostly what we have on hand.

If you have time, my secret crush Hank Shaw of Hunter Angler Gardener Cook has been doing a really fun, helpful series on making meals with what you have.  He has authored many beautiful books on cooking wild game and plants with gourmet results so that gives you an idea of what he's finding in his freezer but his posts are very helpful.
Posted by Cottontailfarm at 10:42 PM