The oldest, at 4 years old, has been asking a lot of innocent and painfully awkward questions lately about death and my mother. She died when I was 6 months pregnant with him and we talk about her and look at pictures all the time.

Today in the middle of one of these discussions (In the McDonald's drive through of all places)  he asked "Do trees die? Why? What happened to your mom? Where is her skin? What happened to it?", I explained again what happens when people die, what a cemetery was and asked if he wanted to go see where my mom was buried.  He did.  Off we went. For the first time together.   It took a longer time than usual to get to Rocky Glen because not one but two of the roads leading to the rural cemetery were closed.  We parked,  got out and looked at her gravestone.  I answered his 4 year old questions ("where are her hands?") and we looked at other grave markers. ("Who lives there? And under there?") 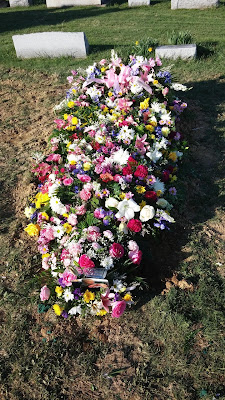 This is what my father, my sister and I did that day years ago with all of the funeral arrangements; took them apart and arranged the flowers in a mile high mound on the grave of a gardener.  It was beautiful.


On the way to the cemetery we passed a 6 point buck dead along the road that someone had stopped and stuck a red plastic Rudolph nose on. The oldest didn't notice.

Later in the night I found him with this photo of my mom, slapping it against his thigh. 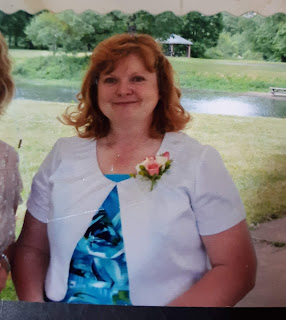 What on earth are you doing?  I asked.  He told me he was trying to "poof her back to life"  I explained again that it it didn't work that way and he immediately suggested we suggested we get out the game Bananagrams.  He said that we could spell out her name with the tiles "to make you less sad".  We did.  I was ok. 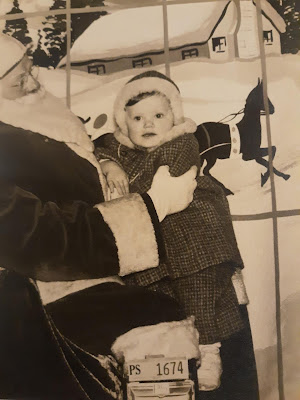 While looking for the grave photo I found this one of my mom. She's sitting on Santa's lap in 1955 at the exact age our youngest is now.

I hope I am explaining all of this the right way and not screwing it up.  The oldest has a lot of questions but he's 4 years old and trying to understand the world.  I am mostly ok but having an extra beer tonight which I think is forgivable. Sometimes these everyday moments just catch me sideways.

Why share this personal thing?  Why blog at all?  I've spent a lot of time thinking about that and what seems right to me is that I blog in order to keep a record of my life.  So that one day my children will be able to read it and remember my personality, what my voice sounded like.

Posted by Cottontailfarm at 9:22 PM