Making the best of things

The last week has been a lesson in trying to make the best of things on all fronts.  The weather has been cold and wet but I still take the kids outside every day to shake the dust off. 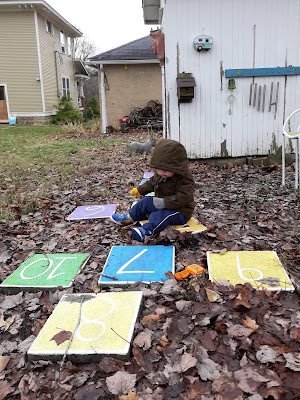 Sitting on the hopscotch walk, complaining about his mittens. 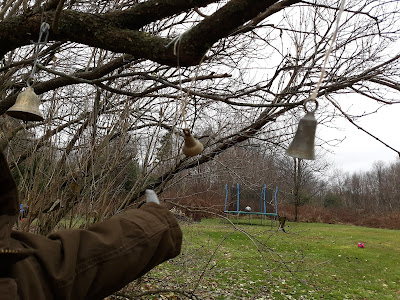 Ringing bells on an empty tree. 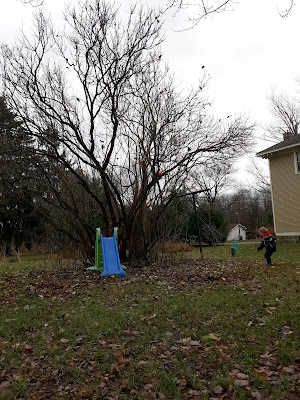 Making a pulley out of some clothesline and a Frisbee. 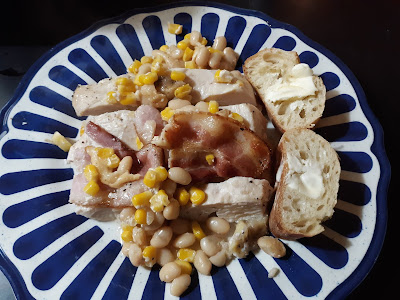 We had Jamie Oliver's Maryland chicken this week.  I didn't have enough bananas so added some apples.  We didn't have white wine so I used apple juice.  It was good.  Tonight my husband and I had the leftovers with the kids running around acting like feral animals.  The kids refused to eat it.  Bee licked the leftover salad before I could put it away. The kids are complaining now that they're hungry. 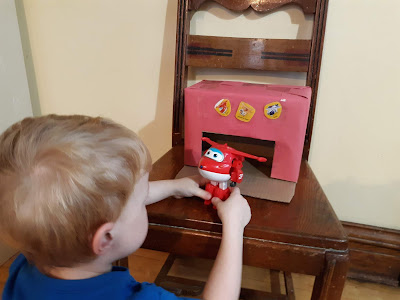 The oldest loved his Jet toy but it was lost a couple of months ago.  I've checked everywhere and asked everyone.  This week I texted my sister a picture of him and asked if she'd possibly seen it.  She had not but 2 days later the oldest received a box in the mail from Amazon; she had sent him a new Jet.  He was so excited when he opened it that I couldn't get a picture; it's just a snap shot of him screaming in excitement and waving a toy above his head.  We/I made an aircraft hanger out of the Amazon box.

Here are the 4 of us tonight eating popcorn and watching Super Wings.

I have been selling things on Ebay for years now to bring in a little extra cash and regularly get stuff out of the house.  I pride myself on being a good and honest seller but this week I had an experience that was just so depressing.  A person gave me a very low-ball offer on an item that had been sitting for awhile so I accepted it.  Then they asked if I combined shipping.  Sure I do.  Then they wanted 4 other items but didn't want to pay anything close to my opening cost for any of them.  We negotiated and I gave them my best price with shipping.  They agreed.  Then they complained about the agreed on shipping cost because all of that "couldn't possibly cost more than $3 to ship" and "obviously I was new to this" with lots of "God bless" thrown in.  It was becoming apparent that the initial sale was designed to build trust.

Nothing feels worse than being hustled and eventually I just shipped their initial item ($4 total, seriously) and told them, sorry, the rest was going for auction.  They then lost it claiming I was wasting their time etc and the thing they bought couldn't have cost more than a stamp to ship. And so forth.

That $4 total? After fees, taxes and shipping I may have cleared 50 cents.  Tops.  Of course they lodged this complaint only after I had mailed out an item with no tracking.  I guarantee that next week they'll be back complaining that the item wasn't as described or  that they never got it.  Then I'll have to refund the whole thing and they'll get to keep the item.  So after years on Ebay and literally hundreds of successful sales I know I am going to get a negative feedback from this person.  I actually blocked them from my account after receiving no less than 10 messages in 24 hours.  Among of which was one telling me not to contact them because they were busy selling the very thing I had sold them. Ending in, again, "god bless!"

Last week I went to the post office to ship some things I had sold.  I took both kids with me. Our post office is an old beautiful thing made of marble. The acoustics are fantastic.  The oldest knows enough to behave himself but the baby spent the whole wait babbling and exclaiming as loudly as he could to hear the echos. And trying to throw himself out of the stroller. The oldest hid under a display. I felt a tap on my shoulder and turned around.  There was a line of 5 ladies behind me all in their 70's or later.  The tapper looked at me and said "Honey, these are the best years of your life". I must have made a face because she continued "I'm a grandma, I know". Everyone else nodded in agreement.  The kids continued yelling and being ridiculous until I was finally checked out.  When I turned around to leave I thanked them all for being so nice and patient and one of the ladies piped up "I hope you have wine at home!".

It's always something.
Posted by Cottontailfarm at 8:04 PM