Well. I have to be honest. It feels really, really good to be back in food production here.

The little quail I bought the other day are doing great.  Sadly, we did lose one. One of the tiny yellow A&M quail was lying dead in the bedding Saturday morning.  There is nothing sadder than a dead baby bird. What went wrong? I have no idea.  I've always had pretty good luck but there are a million things that can go wrong with birds. Sometimes it's something they're born with. Sometimes something goes wrong later.  All of the rest of them look healthy and have already grown.  I put a bunch of pine boughs in with them and they're having a great time zooming in and out of them and popping around like little bumblebees.  Quail really like having cover to hide in and when they are startled they flush straight up into the air.  Which is adorable when they're the size of peanuts and you're just trying to give them fresh water.

The little man and I drove to the TSC in Meadville Friday and brought home 12 meat chickens. Finally! 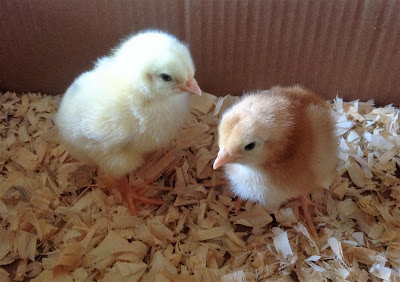 They had Red Rangers and Cornish Crosses and I bought 6 of each so that I could compare them. The Red Rangers we had last year were a joy and the hen I kept back has been a terrific producer of large, speckled brown eggs.  However, I did have to put down one of the Red Rangers this morning. It was obvious that something was very wrong with it that was not going to get better.  It's worth mentioning that when I bought the Rangers some of them had pasty butt (yes, that's a real thing due to stress and not contagious) so they may have had a rough time in shipment to the store.  These were NOT the ones I purchased, obviously, but they were all in the same shipment.  I'm assuming the box they were mailed in may have gotten chilled, kicked off of a truck, lost in the mail, who knows.

I said above that there's nothing sadder than a dead baby bird. There is. It's having to kill one yourself.  Which, if you ever need to know, is done with a pair of kitchen shears.

Saturday I raked out part of the spring side of the garden and the little man and I planted 10 lbs of seed potatoes.  Frankly I was surprised we got it done but he was a great little helper.  He carried the potatoes to the garden in his wheelbarrow. I made the rows and he took the potatoes out of the bag and threw them over the fence. 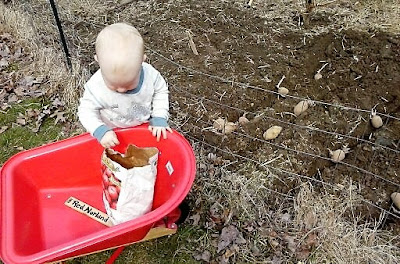 Then we covered them up and stomped on the dirt.  It was adorable. 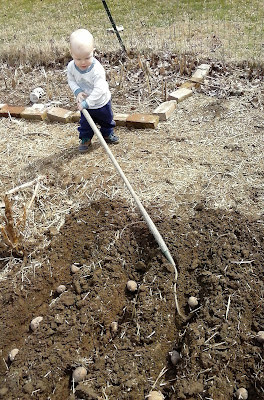 I could have cut some of these potatoes into pieces to get more "seeds" but I hesitated because I've never planted them this early and figured they had a better chance of thriving if they where planted whole.  We'll see what happens. We planted 5 lbs each of Red Norland and Yukon Gold.

It was 70 today and if the weather continues to hold I'd like to get more done in the garden this week; plant spinach, orach, parsley and chives.  Also, the strawberry, shallot and leek seeds under lights are starting to grow!
Posted by Cottontailfarm at 9:37 PM