I don't pen the ducks up at night during the winter but I have to when spring comes around.  If I don't then they tend to lay their eggs willy-nilly all over the yard.  Last year the crows discovered duck eggs made a pretty good breakfast and would wait every morning for the eggs to be laid. Then they would swoop down and steal them before I could steal them.  So every night into the duck ark they go.  They're really good about laying in nests and I know just where to look in the morning - the Pekin makes a straw nest under the little ramp and lays there.  Sometimes the Runners will use her nest but more often than not they go upstairs and use the little chicken nest boxes.  So every morning I check both spots.

What did I find today?  Our first ever fairy duck egg. 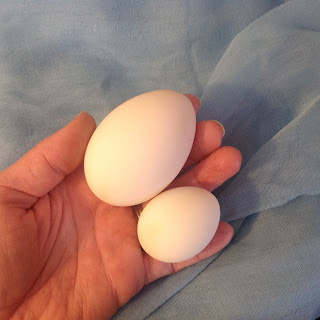 It's so tiny.  Smaller than a bantam egg. 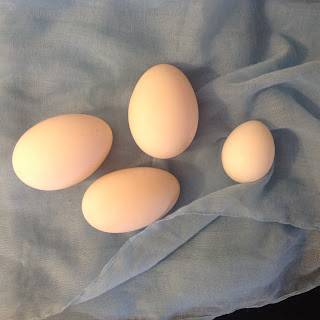 This tiny egg was in the nest box with another full sized egg.  Called "fairy eggs", "rooster eggs" or "witch eggs" they are either due to a blip in a lady bird's system (if she's a seasoned layer) or a young bird's first attempts at laying an egg.

(They are also, God help me, known in this country as "fart eggs". I am not making that up. While it is a well documented scientific fact that rainbows are the product of bunny toots I refuse to believe that a duck has ever tooted an egg. Unless that duck is the kind of duck that may have been a guest on the Jerry Springer show. Just. Gross.)

So, a fairy egg.  I actually squealed when I saw it because, come on, it's adorable.  I didn't know when I brought it into my house that it could have possibly been the work of the devil.  I should have thrown it over the roof of the house to ward off evil but I didn't.  It's sitting in the refrigerator.  Harmlessly. So far.

So where did it come from?  We have 5 female ducks and have been getting 3 eggs a day like clockwork - 1 Pekin and 2 Runners.  The stray duck that showed up in our yard is too old for this kind of thing so I think it was the first laying from the spotted duck that was born here last September.

We are knee deep in eggs.  I think there are about 3 1/2 dozen in the house right now.  Eggs for breakfast, lunch, dinner, snacks and baked into treats.  Everyone's cholesterol level, including the cats' is probably through the roof.
Posted by Cottontailfarm at 9:14 PM