I baked buns yesterday.  Who cares? What's the big deal?  Well, I've never made them before and maybe this might help someone else.  I bake bread here 4 or 5 times a week and do a very basic but versatile no-knead bread.   It couldn't be simpler and you can alter it a thousand ways.  If you can stir you can make this bread - promise.  I also do various sweet breads and a very good naan but rolls/buns always seemed.... fiddly.  Like you had to actually measure ingredients.  Then knead and shape the dough.  It makes my head hurt to think about.  Probably because I have a teething toddler yelling "MAMAMA!" and climbing up my leg at all times. It's nice to feel needed.

Store bought rolls and buns are so gross...  they're like soft flavorless sponges that yes, I guess they hold a burger but that's it.  There is absolutely nothing redeeming about them and they taste like paste. So whenever I cook anything requiring a bun I re-visit this problem and think to myself  "I really, really wish I had some sort of pan with holes in it that could hold little balls of dough.  And a lid for it".  Yesterday it occurred to me.  "You do, dumbass.  Everyone with an oven does.  It's called a muffin tin".  Literally smacked my forehead with my palm.

So I made a batch of dough and added to it two leftover egg yolks from making macaroons the night before.  Added a bit more flour than I usually would.  When it came time to bake I put the muffin tin in the oven along with the cookie sheet to pre-heat. While they were heating I cut off 12 chunks of dough roughly the same size as golf balls, rolled them into balls and let them rest.  When everything was hot I sprayed the muffin tin with olive oil, tossed in the dough balls and put it in the oven.  Set the hot cookie sheet, inverted, on top to act as a lid to proof the buns during the first 10 minutes of baking.  After that I took the sheet off, put an egg wash over the buns and baked for another 15. 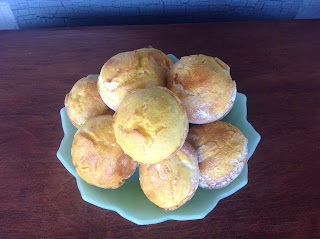 They're amazing.  More the size of sliders than full buns, they were great with the pulled pork we had last night.  Or to just eat on their own.

It reminded us of the first time I made homemade noodles.  It was a revelation to us that something so simple that we took for granted and didn't even taste while we were eating was elevated to a thing. An actual contributing ingredient to a meal when done well.

Makes it worth the effort.

Anyone else make something humble that tastes amazing? Did it change the way you think about cooking?
Posted by Cottontailfarm at 8:16 PM