It's been a busy couple of weeks.  We were so lucky to get away for a few days and drive to NC to see the North Carolina State Sheepdog Trial Championship!   What an awesome event.  To see these great working dogs with the sheep was just fantastic. 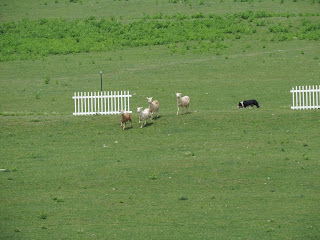 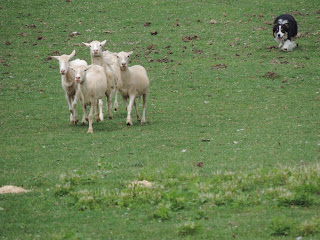 We had a few surprises going on at home while we were gone though.  The first was that I got a call about mid-trip - a raccoon had gotten in the chicken yard and torn apart the shelter the 10 peeps were staying in.  It was a total blood bath. Five of the peeps were set to go to a friend and the other 5 were going to be harvested at the end of the summer.  Although have been absolutely plagued with raccoons since we moved here this is the first attack we've had.  This is a problem we just can't turn the tide on, no matter how hard we try to get the numbers down.  Oh well, you win some you lose some.  RIP peeps.

The second surprise happened the morning after we got home.  I went to the garage to get feed and I heard a squeaking noise.  A bird?  I looked all over, nothing, and then looked down.  Not a bird.  Kittens. Four kittens.  Yes, we have cats but they are INSIDE cats and are BOTH FIXED.  I've been seeing a little black cat on our property for about a month, sometimes she hangs out in the garage (there's a gap at the bottom where she comes and goes) but I couldn't tell she was pregnant. Awesome.  I set the little family up with a litter box, food and water and started knocking on doors.  Of course no one knows anything about who the cat belongs to.  So I started calling shelters.  We are on a waiting list.  This whole situation pisses me off to no end.  If you have cats-fix them. No one around here fixes their cats, they all run wild on our property spraying our car, peeing on our front door and now having kittens in our garage.  I love cats, I just can't stand some cat owners.  Meanwhile, how does work get done when I'm greeted by this? It doesn't. 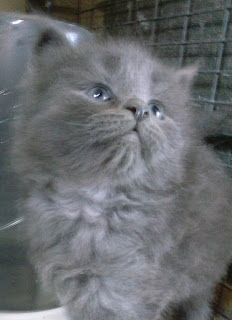 No, I can't keep them.  I already pleaded my case on this one and was denied.

The red rangers and silkies were sent to the butcher this week.  The red rangers were a huge success, they fattened up really well and were really nice chickens to have on the property.  I kept one hen back for eggs but the rest went.   I was worried that they would be a disappointment carcass-wise because they weren't Cornish Cross, but no.  There wasn't a single one I was unhappy with. They've been parted up and put in the freezer, fat rendered, stock made.  I also made pate with the livers using the recipe from Hank Shaw's glorious book Duck, Duck Goose.  Check out Hank's beautiful website here  What did I learn from this project?

The lone ranger is the chicken on the far right.  Hey, they move quick. What can I say? 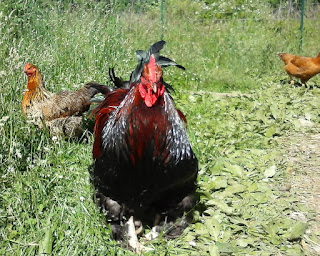 Another chicken picture. The hen in the back is the daughter of the pair in the front. 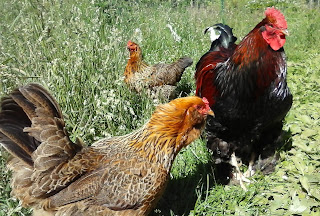 Lastly, caused a scene picking up my baby turkeys from Agway.  The Agway is in the next town over, decidedly NOT rural.  I was running errands so I was cleaned up and had on a fresh coat of lipstick and actually looked semi-pulled together.  Walked in and announced that I was there to pick up my turkey order.  The nice lady at the counter asked if I wanted to pick out the turkeys?  Sure I did.  I selected two healthy, feisty looking babies.  "Oh, I like that one!" "Oh, that's a cute one!" she exclaimed.  That should have been my first hint of events to come.  Meanwhile, there are two guys watching this who look like they've just been outside working, rolling their eyes at the whole scene.  Turkeys were boxed up and taken to the register, making a racket the whole way.  Farm-y guys are now in line behind me.  "Oh, they're so loud!" she said  "Listen to them! When you get home you should name them Peep and Re-peep!"  Oh man. It took me a second. "Um, how about Gravy and Leftovers?  No, we're going to eat these. They're not pets."  I heard a snort behind me and one of the guys started laughing.  I went on "They're going to be for meat.  I mean, are people actually buying these AS PETS?"  I thought this woman was going to pass out.  She actually put a hand to her chest and said "oh, my heart's just pattering! Oh.  I hope so.  I love animals!"  Lady you work at a FEED STORE.  I love animals too.  Sometimes just on my plate.  I assured her they'd have a good life and got the hell out of there before someone called PETA.

It's always something around here.

Posted by Cottontailfarm at 5:11 PM