Last weekend at my sister's house I had some excellent sushi which *almost* made me wish we lived closer to civilization.  Then it occurred to me that I could try making it at home. Aldi and Walmart had everything needed (including a bamboo mat to roll them) but for the seaweed sheets we had to go to Hermitage which gave me to chance to talk to gentleman at the sushi counter while trying to discreetly watch him make rolls. 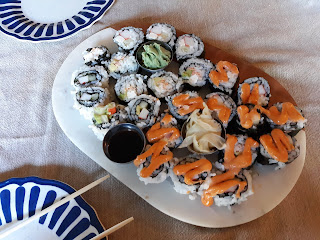 It was very fun and very messy. I cut the hole in the piping bag too large for the sauces and there was sushi rice everywhere. But! This is the fun part. It seems like sushi is one of those magical things that was born out of frugality.  Like a good omelet or burrito it only takes the throwing together of tiny bits of this and that to make something delicious. Really, what goes inside the roll besides rice is so small that it could be a garnish.  I only used 3 of the seaweed wraps and a pack of 10 was about $4. So we'll be doing this again, and soon. 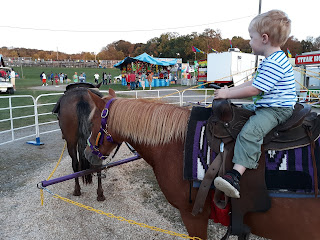 After dinner the my husband watched the baby and oldest and I went to the Jamestown fair just the two of us. We had a blast.  We saw the amimals, he rode a pony, we went down the huge potato sack slides with him sitting on my lap (frighting for me but not, apparently,  for a 2 year old girl we saw riding solo). He played in the corn box and we ran into his former pre-school teacher. 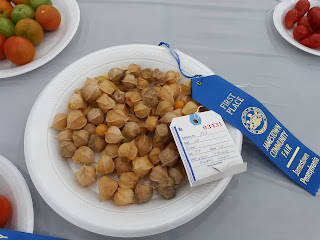 We hardly entered anything this year, what with the garden doing so poorly. But I'm grateful for what we were able to contribute to the displays. 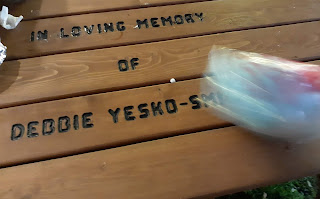 We found the picnic table that my dad donated in my mom's memory. Nothing spells classy like an adult  quiet weeping at a fair.  That blur is a bag of cotton candy. We got a corndog and fries. It was a wonderful time. I miss spending time alone with my oldest.

The kitchen still has rice on the floor and dishes in the sink but I am off to Downton Abbey and a glass of wine.

Posted by Cottontailfarm at 10:05 PM