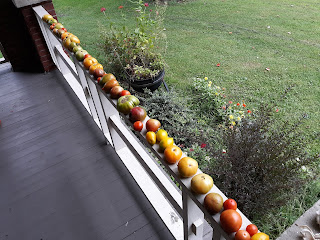 Our front porch.  A marching line of ripening tomatoes, one of the few things the deer didn't eat.

I'm starting to close down the garden. 90% of the kale and all of the chard has been blanched and frozen. Tomatoes are being picked at the first hint of color and set on the porch to ripen, away from the chickens.  We've been having a lot of BLT's and soup. 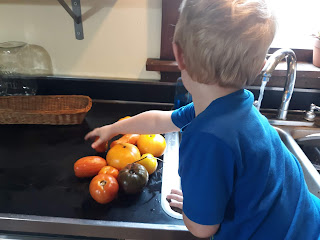 We tried a tomato soup recipe that looked very promising . I got out the kitchen scale and put the oldest in charge of washing, sorting and weighing the tomatoes hoping that being involved in the process would make him more inclined to eat the finished product.  It didn't because the soup ended up being a bit spicy from the chili pepper. Plus I, god forbid,  garnished my own bowl with basil causing him to protest "I'm not eating leaves!" Well, sorry little buddy, Aldi seems to have discontinued your favorite tomato soup so we're going to have to come up with something. 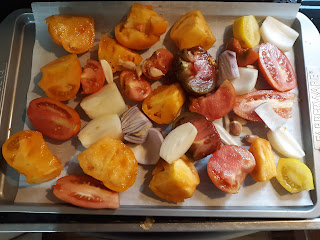 Everything was roasted before being pureed. It was compined with chicken stock, cream and woshishire sauce. My husband did say it was the best tomato soup he'd ever had so that's something.  We'll try it again without the chilli pepper. 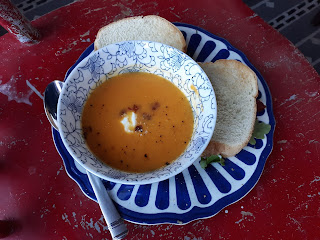 Here was tonight's soup: roasted sweet potato, carrots, onions and apple with chicken stock and heavy cream.  The bonus part of the soup making is that there is an entire meal's worth of each in the freezer to be had later. 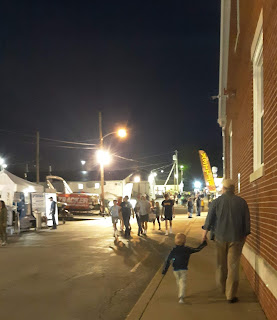 The oldest has been back to preschool exactly a week which is just long enough to get the ever-present "preschool runny nose and cough". And give it to his little brother.  Turns out no one sleeps well with two littles in the house with nightime stuffy, runny noses.


Posted by Cottontailfarm at 9:03 PM