A nightime visitor, a book read!

Last night while closing up the birds there was an unusual sound coming from a tree right behind the trampoline.  Sort of a like a higher pitched whinny of a horse but obviously there wasn't a horse stuck up the tree.  I couldn't see anything with my flashlight but after Googling "nightime noise sounds like horse whinny " have determined we have a Screech Owl. It was back again 8 tonight, from the sounds of it farther off at the neighbors place.  We haven't heard an owl here for a very long time so it is fun to hear. 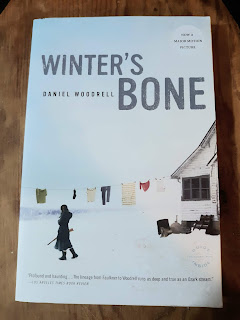 This treat was picked up at the book sale last week. I had badly wanted to see the film when it came out, but didn't,  and am glad that I ended up reading the book instead of seeing the film. For one, a book is always better and 2) watching this as a film would have been too much for me to stomach.  The book takes place over just a few days. The main character is Ree, a 16 year old girl taking care of her small brothers and mentally ill mother in an extremely poor part of the Ozarks. There's little wood, little food, dad is in jail for making meth again and things get complicated when the bail bondsman shows up say that, oh hey, dad posted the house as part of his bond, thought you should know.

Dad's basically a decent guy and we later find out that he made some poor choices post-arrest to try to help his kids.  When he misses his court hearing Ree tries to track him down. It quickly becomes apparent that her father is dead. Luckily,  I guess, the law doesn't require dead people to keep court hearings so there's a chance she can keep her family home afterall.

The area is a mess of a place where meth making is the primary occupation and rocking the boat leads to her getting beaten to near death towards the end of the book but eventually the same group of women that beat the hell out of her for asking questions lead her to her murdered father's body sunk in a pond, hand her a chainsaw and explain that "the law" will require both hands for proof of death, so get to it. This all sounds horrible and ridiculous to those of us better blessed.  But.  I dated a man in college whose kin came from an area of NE PA where this story wouldn't have raised an eyebrow.  No running water, trailer bathtub used to butcher roadkill, drugs everywhere.  His sister thought people like Paris Hilton (this was the early 2000's) shopped at Macy's and what the hell did my parents do for a living that they could afford a dishwasher (um, not cocaine?)  Anyway. Some people do rise out of that kind of life by their bootstraps.

Ree carries her trials as matter-of-fact with all the dignity and pride she can keep.  The gently sort-of -maybe-sexual-mostly-safehaven relationship she has with her best friend Sweet Pea (who is 16, married, with a baby and her own burden husband) takes some of the sting off the whole mess. It's a trial. The whole plot is a trial but so beautifully written that I was hooked on the first page, read 150 pages of it last night when the kids were in bed and finished it this morning while making breakfast.

Loved it.  It's going to take the honor of a seasonal winter read for the first snowfalls, right up there with The Shining.

The next post will be lighter, about the garden and I don't know, maybe some random internet picture of a kitten to wash away the heaviness of that book post.

Posted by Cottontailfarm at 9:51 PM