Some pictures taken this week. I will like to look back at them when our days are cold and full of snow. 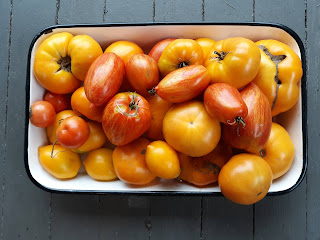 A tray of tomatoes put in the freezer for lack of time to do any canning. 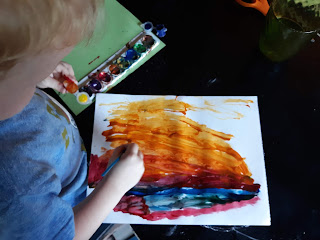 An evening painting.  This is an underwater landscape. He's learning to mix colors.  Earlier this week we spent his little brother's nap time at the sink with water and food coloring learning things like red+blue=purple. 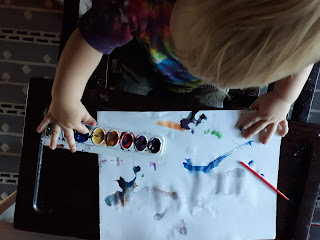 It's fun that the youngest at 14 months has picked up on things like painting and playing with play dough by watching his brother work. 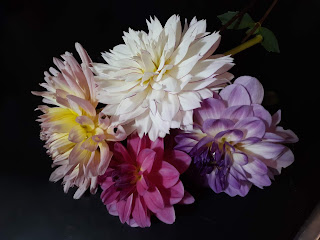 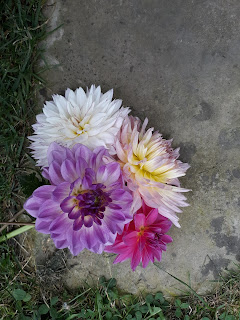 The pink cactus one is new along with the white one with purple edging.  The majority of the dalhias are just now starting to bloom. 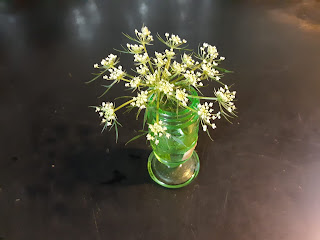 My favorite. A flower picked for mom when she really needed one. 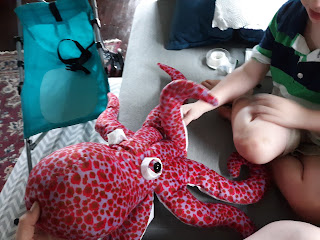 An  octopus bandaged and cared for. It had been attacked by a sea cucumber,  apparently.  He adores this octopus and talks about our trip to the Cleveland Aquarium almost daily. That $30 stuffed octopus has turned into his version of the Velveteen Rabbit. 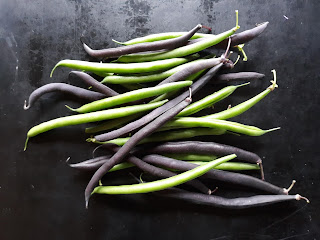 A handful of beans, trimmed, seasoned and packed in a baggie for the weekend.

We are going camping.  Tomorrow should prove to be an interesting day; cleaning, finishing stocking and hitching the camper with the husband at work and with two little helpers here.  My father has upped the camping ante by planning to cook scallops and fish tomorrow so I need to bring a better game than chips and hotdogs. Papa doesn't cook. At all.  So that's an amusing sentence in itself. I am roasting a bag of potatoes that we can warm on the fire for different meals. I've also prepared lots of ingredients for making omelets with the eggs and whatnot put into baggies and cooked in simmering water.  I learned this particular technique from a friend of ours who has turned 93  (94?) this summer.  She hoasted a big brunch this spring where we all did this in her kitchen, it was tons of fun and I'll write her a card talking about it after the weekend.  The weather is going to be all over the place as far as clothing so I need to have everything from bathing suits to jackets at the ready.  In multiples since both children love wet and dirt.  This has gotten a lot more complicated since the days when the husband and I only required a tent, coffee, a pack of hotdogs and beer to be happy.  But both the littles already love camping so whatever the weekend brings is going to be a wonderful thing.

Posted by Cottontailfarm at 4:15 AM