It must be the changing of the seasons getting to me but today I decided that I could not stand our home the way it was for a second longer.  My husband and I (when we renovated the house)  had always gone for a sort of minimal adult look but after having kids the house just looks like an Ikea trip married with the explosion of a dumpster full of toys.  Today I just couldn't take it anymore.

I'm a woman.  It's Fall.  Someone please hand me a pillow sham with a leaf on it. 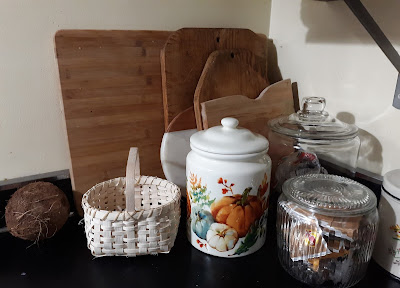 I got this pumpkin cookie jar at at Wal-Mart today for $10. 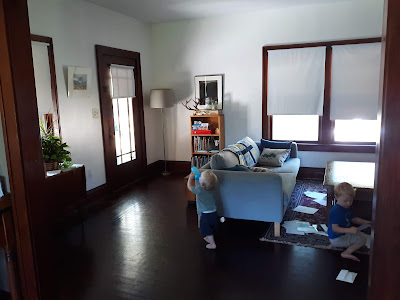 This morning I threw all of the toys into a corner and re-arranged the whole living room piece by piece. We now have an entryway of sorts.  It looks refreshing after having the sofa in the same place for 8 years. 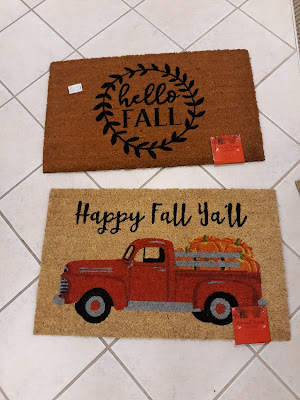 I would really like this $10 outdoor rug at the bottom of the photo.  It makes my heart go pitter-patter.  There is a new home store in town and I didn't quite want to settle on it (the rug) so took a picture and may go back on Sunday.  The things that I'm finding myself attracted to are not necessarily what the other half would pick and so we need to strike a balance. 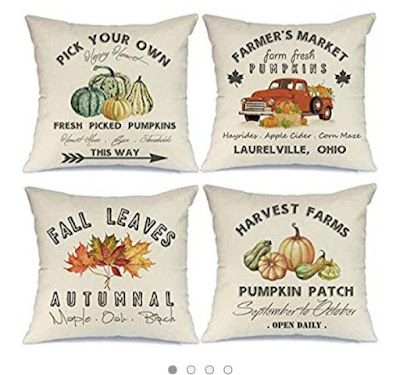 Planning on ordering this set of pillow shams off Amazon.  I only really want 3 out of the 4.

There needs to be more "fall" here; more pumpkins, more orange, more things to get excited about.

We went to a pumpkin farm today; the kids, my mother-in-law and me.  The place nearest us is not selling this year so we decided on a small Amish farm advertised in the local paper.  Google maps took us waaaay out into the middle of nowhere and eventually tried to guide us down an unmarked dirt tractor path.  Um, no.  I parked the car in the middle of the road and called my father who was out with an Amish friend up in Erie today.  "Ok." I said "You know the area.  Where in the hell were we? Because we're lost... We're kind of by Atlantic, or were half an hour ago anyway and are looking for a Byler pumpkin farm."  I asked.  I could hear his friend talking in the background 'Oh, the Byler pumpkin farm in Atlantic? It's on the corner of such-and-such roads".  Which is hilarious because the Amish family names around here are Byler and Miller.  There are are 1,000s  of Bylers.  It could have been anyone, really. But he was right, we turned a corner up the road and there it was, the pumpkin farm.

It was a fun visit.  A ton of pumpkins piled out in the yard, Amish kiddos playing with the oldest, pumpkin rolls for sale fresh out of the oven.   I talked to the woman collecting the money about the pumpkins and asked how in the world they managed to grow such crops while avoiding squash bugs " Have you tried spraying?" she asked.  Well, no, we have not.

The youngest slept and the oldest was barely respectable.  He did indeed throw a pumpkin, which I purchased.  While we were there a school bus pulled up, lots of Amish kids piled out and he yelled "LOOK! MORE FARMERS!!!"  It was so embarrassing.

We brought home about 12 various pumpkins and squash to decorate the porch.  The cobwebs need to come down and the dead plants pulled but I think we are well on our way to having a porch that looks more like Fall and less like crap when people visit.

And for that, and a slightly less horrible interior, I am grateful.


Posted by Cottontailfarm at 10:23 PM