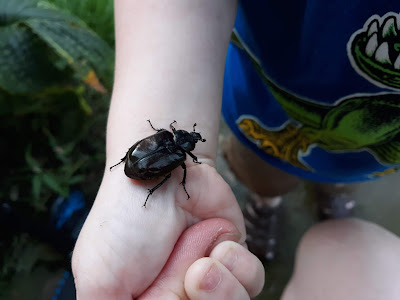 Our new roommate.  Yes, it's that big.

I had an entirely different post in mind for tonight but life has a way of intervening sometimes, doesn't it?

All four of us were outside this evening by the backdoor when, mid-sentence, I spied this huge beetle on the foundation of the house.  We quickly picked it up, took some photos and I carted it away into the house in the bug cage belonging to the oldest, under the guise of "looking at it later".  What I really had intended to do was put it in the freezer to humanely kill it so that we could add it to our collection of insects we've found on the propriety.  But then I got distracted, mainly because the kids were driving me nuts so I went out to spend half an hour in the camper with a book and a cold beer.

Inside, and much later, I picked up the bug cage to try to identify the beetle.  But.... the beetle was missing.  There was no beetle in that bug cage.  Going into the living room, holding the cage in the air, I hesitantly asked "Umm... guys? What happened to the big beetle we found outside?"  The oldest  "Oh, I lost it."  Beg your pardon? ' I was playing with it and I lost it."  Where?  I asked.. "Oh, I don't know".  "What the actual H?"  I said, half-joking, panicked.  "Are you all serious?  There's a huge, angry dung beetle loose in out house?  One that's the size of a small pony?"  No one else seems bothered by this.  I can only picture it crawling on me in my sleep.  It was suggested to me that I calm down and look under the rug.  No, it's not there.  It's hiding and plotting an attack.

Also tonight I stabbed myself in the toe with a fork.  We had "breakfast for dinner" and in the hurry of trying to get hot eggs on the table, with forks perched on plates, a fork slipped off of one plate and fell.  I felt it hit my toe, yes it hurt, but seemed like no big deal until the bleeding started.  Two of the tines had gone into my big toe.  Blood was everywhere.  It looked like a crime scene.  Yes, I'll live but my toe hurts.
First-world problems.

It just occurred to me to worry of the huge beetle roaming loose in the house will be attracted to the band aid on my toe.

Post script: after writing this we saw our cat Elyse doing her "pointer dog" pose at a corner of the living room. The beetle has been found.  Thank God.


Posted by Cottontailfarm at 9:15 PM