So I started to tell the saga of all of my chickens getting murdered in broad daylight.  Here's the rest of the story.   My husband was going birding with his parents so the birds got let out at about 7:30 in the morning... all fluffy heads were accounted for.  That morning I had the geese, my rooster Rocky, about 8 full grown hens and 18 half grown chickens.  We had breakfast, I took the oldest to pre-school, ran errands, went to yoga, visited with the in-laws.... we didn't get back to the house until about 3 in the afternoon.  Around 3:30 I was in the kitchen making snack and just happened to look out the window... in time to see something big-ish, brown and mangy looking with a huge tail run into the bushes holding a full-grown chicken in its mouth.

I thought it was a fox.  A brown, mangy fox.  I've never actually seen a coyote before and in the years of living here we've never heard one or gotten a picture of one on the game camera.  But we do have a fox that's been here since we've moved in.  In fact, witnessing this was actually kind of a novelty until the animal was back 5 minutes later.

Running around the chicken pen.

At this point I called my father who was out of town.  I told him it was a fox.  He told me to get a gun and shoot it.  I was home alone with two little ones so that wasn't happening.  I opened the door and screamed at it.  It took off.  And was back 5 minutes later running around INSIDE the chicken pen.  More screaming.  More running away and coming back.  I called my husband home from work and that was the routine until he got here:  the animal would come back, I would open the door and yell profanities, it would trot off and then come back again.  Every 5 or 10 minutes.  Until my husband was home and I did go out with a gun to sit.  At which point the animal wisely hid.  I still thought it was a fox.  A big, brown fox.  With a dog-like face. 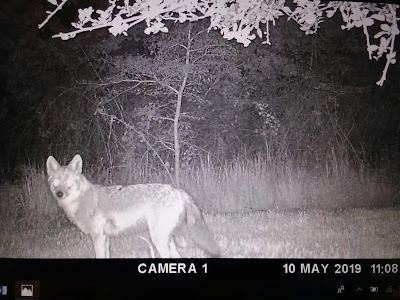 But that night on the game camera we found this. Lots of pictures of this guy. 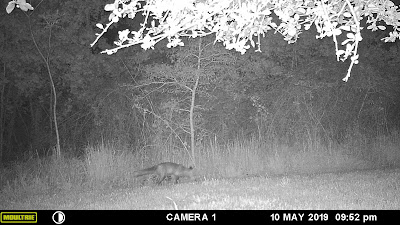 Here's our fox for comparison. In my defense, yes, my eyesight really is that bad.

What I had seen was a coyote.  And it had apparently been at it all day.  The poultry yard looked like rapture had occurred.  It was like a kick in the stomach. Almost all of my birds were gone.  The only survivors are the geese, two young birds, a broody hen and 5 old chickens that were going to be butchered in the fall anyway.

Everyone else was missing or dead. 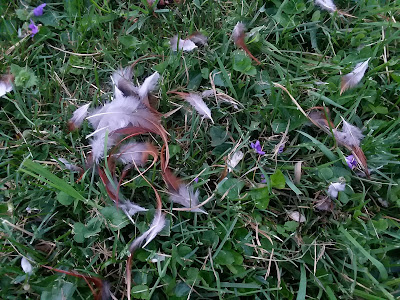 This is what was left of my sweet rooster Rocky. 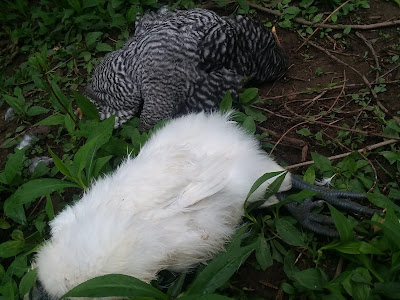 I found these bodies in the back corner of the pen.  When I picked up the barred chicken there were two more bodies stacked neatly under it. 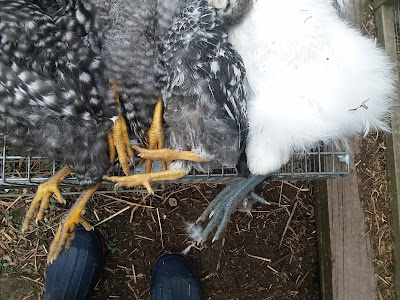 So what did I lose? Rocky for starters.  My sweet little auction impulse buy. He was one of the good guys. 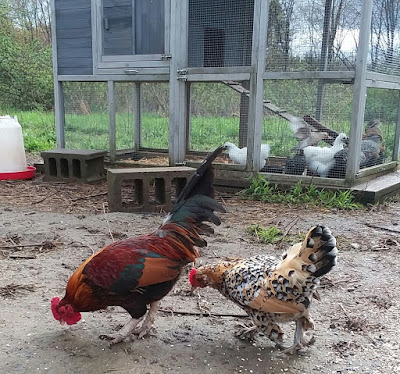 Over the spring I had picked up a really, really nice assortment of chicks at TSC so we'd have a more beautiful flock to look at: Dominique, Silkies, Buff Orpingtons, Blue Rocks, Black Austrolops among others.  Black, white, yellow, orange and blue birds. The plan was to grow them out until I could sex them.  The roosters were going to stock our freezer.  A silkie was going to be a special Halloween dinner because they have purple/black skin and meat.  I was going to pick out the prettiest hens to keep and sell the rest to pay for the whole project.

I'm trying really hard to see any bright side to this disaster.  I guess what I've come away with is that I am very grateful Nigel died before the massacre happened.

Because I had (keyword *had*) some younger ones of this breed, these laying ladies had been sold to a woman through Craigslist just a week prior. 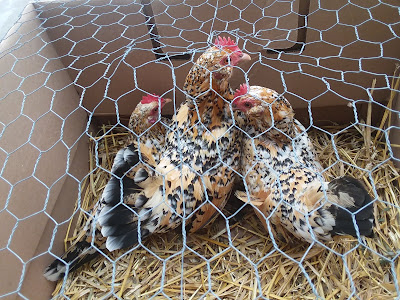 The three ladies sold for $35 and I had two people waiting in line if the first buyer didn't show. So at least they're happy somewhere and not dead. 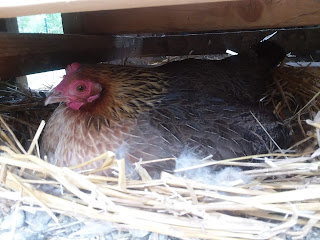 The silver lining is that this sweet lady, Rocky's mate,  is sitting on a nest again.  She was hidden in the coop when all this happened.  Her eggs look good and I think she's due this weekend.

The whole incident just drives home that I need to enjoy what I have every day because the shit might just hit the fan tomorrow.
Posted by Cottontailfarm at 1:21 PM