Impulse buy at the auction

There are several Amish communities in our area that host big summer benefit auctions.  There's one nearby that I try to go to every year.  It is HUGE, with six auctioneers running at the same time.  Plants, quilts, handmade furniture, antiques, animals - all manner of things get auctioned off here.  I never really buy anything except food (hot Bavarian donuts!).  With so much going on at the same time, honestly it can be overwhelming to try to time bidding on items in different locations around the farm.  It's so much fun, though.  I love auctions.  This one especially - there is a time where the buggy horses and ponies are "test driven" up and down the rural road before bidding starts.  This year there was a team of huge draft horses, Belgians I think, that were being test driven around the auction site by several men interested in bidding. I wish I could have taken pictures, it was so beautiful.

Eventually I wandered over to the small animal/poultry section to see what was going to be for sale.  Just to look, I told myself.  Rabbits of all colors and sizes, a lone quail, some pigeons, lots of roosters and lots of banty chickens.  "Bite sized" I joked with another bidder.  There was a gorgeous banty rooster and hen pair the size of potato chips being sold in a wire rabbit cage.  My high bid for just the cage would have been $7, I always need things like that.

The bidding started.  I was dumbfounded.  There wasn't a single rabbit that went for more than $1.50 and the chickens were AVERAGING 75 cents each.  Including 14 week old roosters for $1 each - WHY did I grow my own chickens this year??  I was too stunned to commit and bid, mentally trying to work out where I would put them, when would I have time to butcher, etc. Then the bantys were auctioned.


When the pair came up that I liked I raised my hand and the result was this: 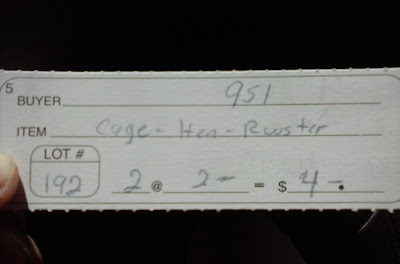 "Ah, hell."  I texted my husband.  I had just effectively bought a pair of yard ornaments.

But oh, are they gorgeous.   Within a couple of hours of being home, the hen laid an egg. 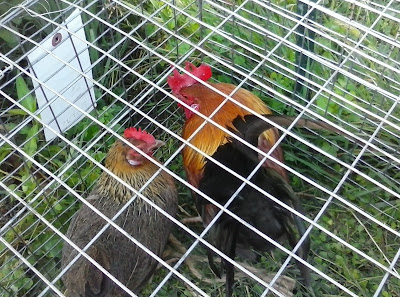 This morning they and the turkeys were installed in the poultry pasture.  Mama hen was not pleased. 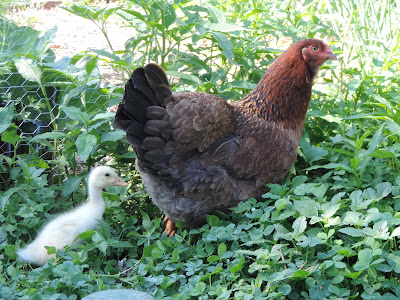 She walked straight over and bit the hen.  Then the rooster came over and lowered his wing and circled.  She promptly beat the hell out of him. 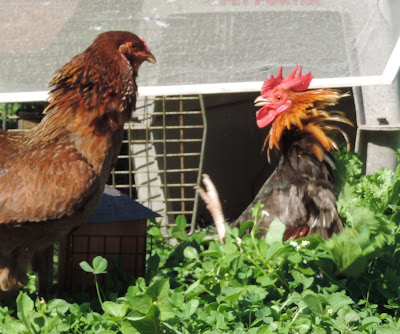 The turkeys were oblivious to the whole thing. 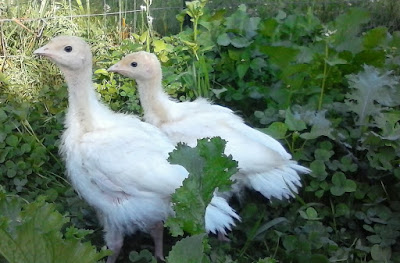 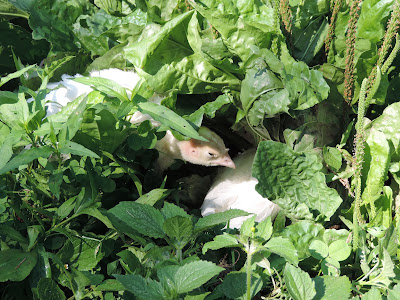 Everyone settled down quickly and are now totally ignoring each other. 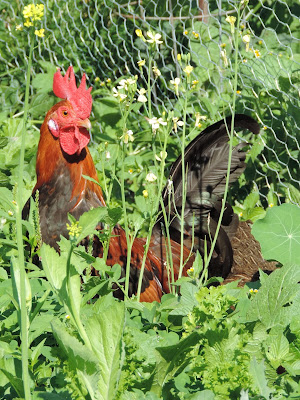 Tonight I'll move mama and baby out into the big chicken yard in a temporary house and the turkeys and banty duo can have the coop.  Incidentally, I suspect we already found out why this rooster ended up at the auction.  We woke up to a high-pitched crow that sounded like someone had kicked a standard-sized rooster in the man parts.  It's indescribable and not in a good way.

I've never stayed for the poultry part of the auction before and next year I'll be prepared.  If roosters are seriously being sold for $1 again, I'll pick up a dozen and either do them myself or make an appointment to have someone else process them.  No more banty roosters though, this one little guy is enough.

Posted by Cottontailfarm at 11:07 AM