There are babies everywhere right now.  I don't think the cuteness factor has ever been higher.
The little man has just been off the charts adorable lately.  He's learning new sounds and has been in a super good mood.  We sat out on the porch during a storm the other day and he waved his arms around and exclaimed over everything he saw.  It's obvious that he has his own words for the things and that he's talking and sometimes asks questions.  He's getting good at the "ba" sound and I'm waiting for him to call Bee by name since he just adores her.

In other baby news,  mama hen hatched out one lone duckling yesterday.  You can just see a tiny bill sticking out. 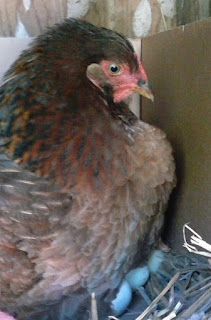 She is still looking rabid when I get near her and so far that's the only egg that's hatched.  I wonder how long I wait to take up the rest of the eggs?  She's going to need to get off the nest and take care of that little one sooner than later.  Tomorrow I suppose. 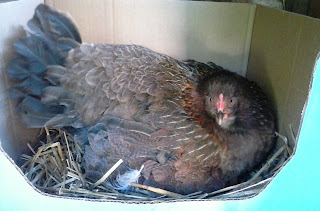 The tiny turkeys have moved out of what they must have considered turkey hell in our basement and are now living in the garage with the kittens.  They're safe in a pet crate.  From what I read the broad breasted whites can be a little hard to raise, but so far these two are really sturdy and healthy. 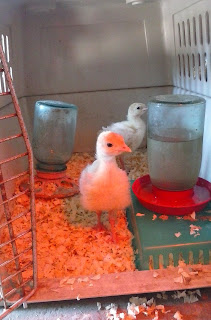 Also, a random shot of eggs collected this morning.  The runner hens bury theirs sometimes so I suspect there are more out there somewhere.  The bottom one is a duck egg. 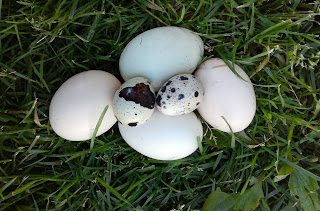 Posted by Cottontailfarm at 11:03 AM