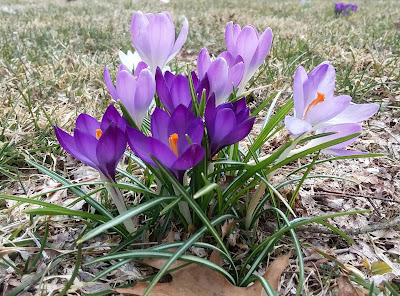 Spring is officially here. The crocus in the front yard look beautiful this year.  Some years the grass is still brown when they bloom and the overall effect is that we've just got some litter out there but this time the grass has started to green and the flowers look really pretty.  All of the bulbs we planted in December are starting to come up.  So glad we did that. 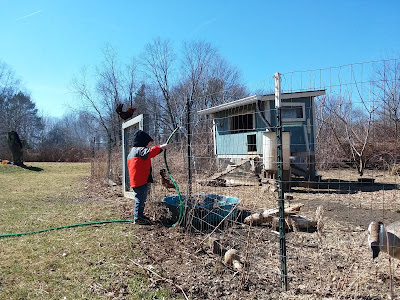 This picture is so funny; the oldest filling the goose pool while rooster Rocky crows on the fence. Rocky is one of the best roosters ever.  He's still feeding the babies his chicken wife adopted last summer, including his son who now is five times his size.  We still have the little bantam rooster that attacks me every time he sees me - Rocky now keeps his eyes open and will knock him sideways if he sees him take a run at me.  He's awesome.  Rocky, not the other one (who the oldest calls "that little turd").

We got the craziest egg this week.  Check it out! 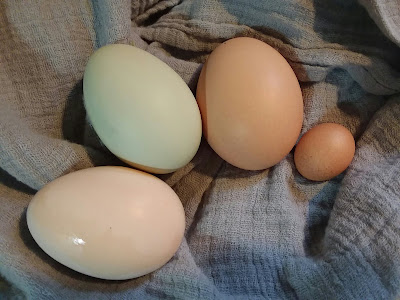 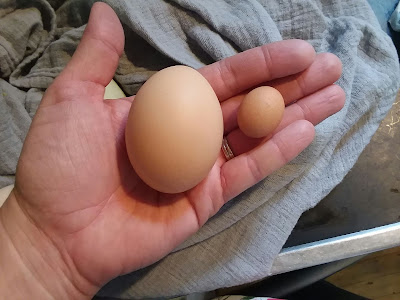 Tiniest fairy egg ever!  It's smaller than a quail egg.  I have no idea who laid it, but only my older hennies lay brown eggs.  It's the first fairy egg we've gotten since that tiny duck egg. The little piece of ginger that we planted back in January finally sprouted.  I had given up on it and was going to throw it out but now it's growing.  No idea what to do now, probably just pot it up and put it out on the porch this spring. 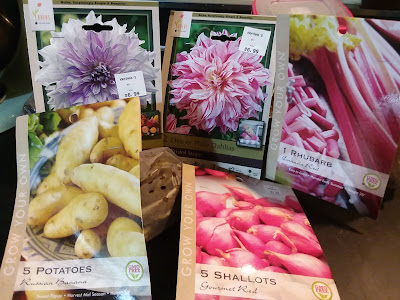 Purchased these as a treat.  The rhubarb is a nice red variety, we grow Victoria (a murky green color) so I'd like to try this.  Every year I lose so many potatoes to mice and voles, I swear this is going to be my last season planting them if I can't figure this out.  The idea this year is to grow them above ground in burlap sacks. The local Agway has burlap coffee sacks for 49c so I picked up 5 along with some buckwheat seed for bee forage.  Plus, I kind of felt like I had to buy something there, we had 4 kids in the store including my eldest who was screaming his head off because he got scratched by a cat while I wasn't looking.  Sigh.

My sister brought her kids over for a couple-day visit and we had a great time with the cousins. 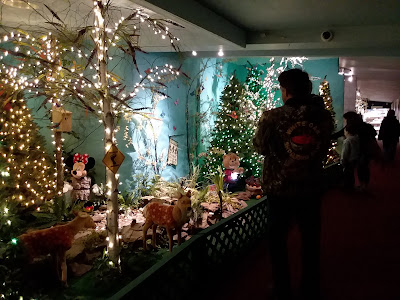 Besides Agway, we went to Easter Bunny lane at Kranyaks, out to dinner and to the Olympic Fun Center.  All of the kiddos had a blast. 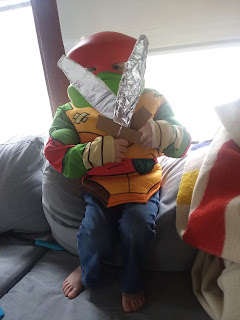 It snowed overnight but has mostly melted off.  Hope to spend some more time outside later on.  I was gifted some wheat berries yesterday (thank you!!!) and we're going to try this Wheat Berry Salad with Kale and Squash for dinner.

Posted by Cottontailfarm at 2:05 PM