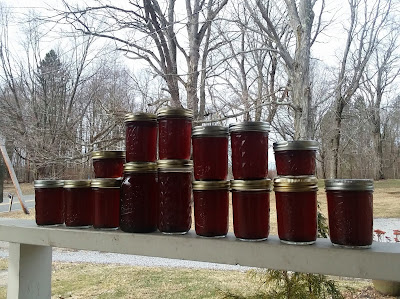 The maple syrup project is done. It was a ton of fun.  I think total I cooked down about 40-43 gallons of sap to get my gallon of syrup.  It took two days outside over a fire, then it was finished in the house.  We still have another 16 gallon of sap in the freezer but we're just going to use that for making iced tea over the next couple of months.

The morning I started this project the fire pit actually had some snow in it.  I put down several layers of cardboard and built the fire on that. 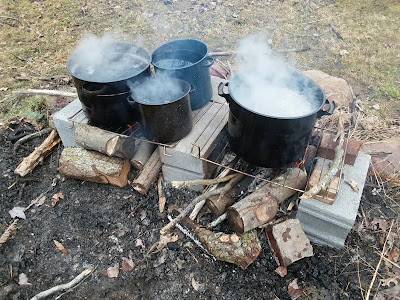 This was my first attempt at a cooking setup.  Don't try this at home or anywhere else for that matter.  I thought that because oven racks could withstand the intense heat of a self-cleaning cycle they would do o.k. over a raging fire.  They did not.  About 1:00 on the first day I noticed they were warping.  Badly.  I pulled them off the fire and tried to press them back flat with my boot while they were still soft.  It mostly worked.  Apparently everyone thought this was a bad idea going in but no one thought to share that information with me. Possibly due to my stubbornness. Replacements would cost about $70 for the two racks.  I'll just deal with warped ones.  The oven came with the house and will probably die someday at which point: new oven racks!

A mere hour after warping the oven racks I set my hair on fire.  It was pulled back into a ponytail but I was crouched down feeding some kindling in and it flared up and... well... yeah.  It wasn't a "stop, drop and roll" situation but still.  Noting worse than hearing a sizzle, smelling your bangs on fire and thinking "oh, shit... how bad does it look? How am I gonna hide this one?"  Good thing there was a haircut scheduled for Tuesday anyway.   It took days to wash the campfire smell out of my hair, I mean it reeked. 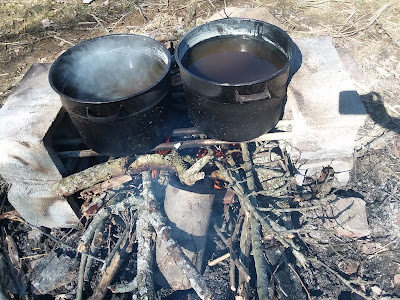 This is the set-up that ended up working.  Heavy metal rods threaded through the holes in the cinder blocks to make a rack.  I don't know what these rods were from, they were here when when we moved in. I liked the cinder blocks because they helped with air flow and I could feed wood into the holes from the side.  They did crack from the heat but at least stayed together enough to get the job done.

It was wonderful, absolutely wonderful to spend two days outside mindlessly tending a fire and sitting in the sunshine. The oldest helped me pick up sticks and we cooked hot dogs and made smores with marshmallow peeps.

It did take a lot of wood to get the job done but not nearly as much as I expected.  My husband and dad had cut down two dead pear trees earlier in the week and I barely touched the pear wood, using instead some maple that we had stacked from last spring and branches that had fallen over the winter. 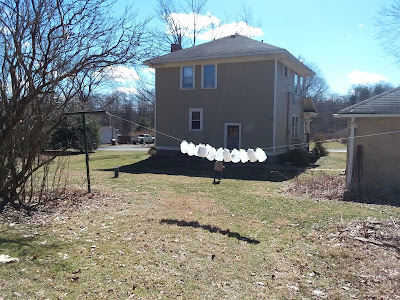 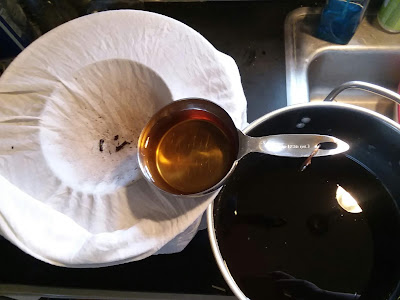 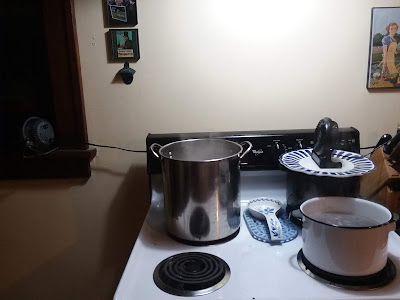 We don't have a vent over the stove but two tiny fans worked pretty well to blow the steam out the window.

You're supposed to heat the sap to a certain temperature for it to be "done" but I figured out pretty quickly that my piece of crap candy thermometer was broken.  So I used the other method of cooking it down until it foams up dramatically.  At that point it looked like syrup.  The jars got filled and water bath canned for 10 minutes. 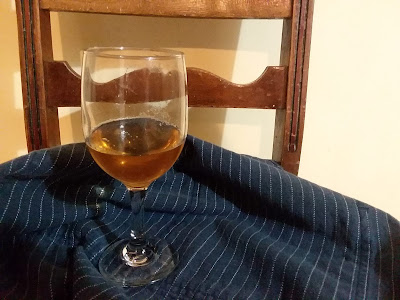 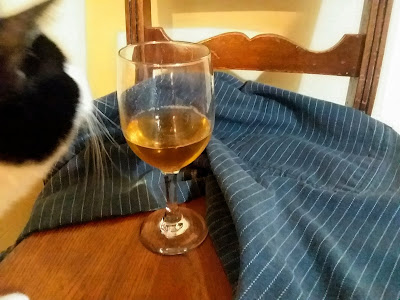 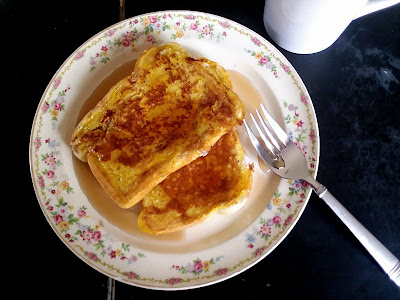 Ta-da!  The finished product.  The syrup is fantastic. It's a lovely color.  It tastes like rich maple and vanilla with a very  slight smoky flavor to it which we all really like.

So the syrup project was a huge success.  Will we do it next year?  A gallon is A LOT of syrup to go through so I don't know.  It was so much fun though.  The oldest and I did drink a lot of sap water while outside, right off the tree.  And he'll be old enough to "help" more next spring.  It would be a fun thing to make a tradition out of.
Posted by Cottontailfarm at 12:23 AM