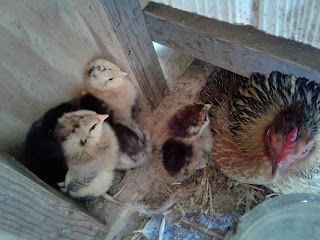 This bantam mama, honestly.  I love her.  The most valuable member of my poultry crew, she's such a good mom that she and her husband can stay here until they die of old age.  You might remember the pair were an impulse buy at an Amish benefit auction.  Best $4.00 investment ever, seriously.  This girl would hatch a rock if she could.  She's the best parent.  I would trust her to watch my kids. Joking? Maybe.

Anyway.  She has been sitting on some eggs that looked like they were a good bet to hatch.  Until they weren't.  Both of the eggs had detached air cells and the odds weren't looking good.  There is nothing sadder than a mama hen that sits, and sits, and sits some more - until she finally gives up.  It's really depressing.  Thank goodness the local TSC has chicks for sale right now.  I kept calling the local stores hoping for some bantams but prepared to settle for just about anything that wasn't a leghorn or a cornish cross.  Then, the store nearest to us got some easter egger pullets in.  I bought six. 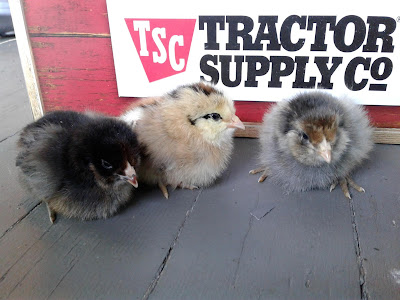 Would you look at the fluffy faces? 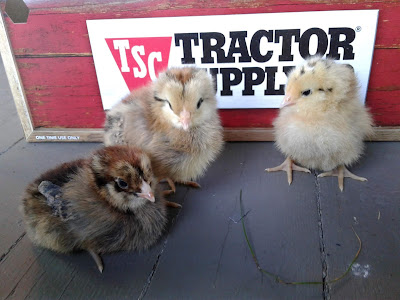 I brought them home at about 7:00 at night and didn't even bother to set up a brooder.  When it got to be dark I took them outside to the chicken coop.  Being as sneaky as possible, I took the eggs away and put the babies underneath her.  She hissed and pecked at me but I hoped for the best.

The next morning: success! 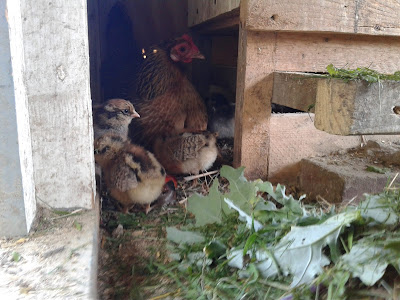 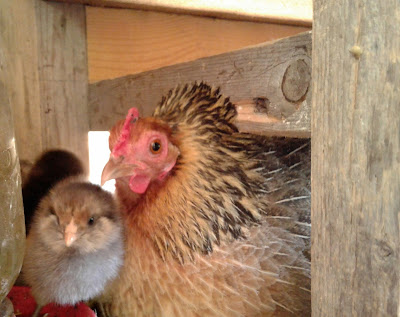 She kept them in her little spot under the nest boxes for three days.  I set up a chick waterer in the coop, covered the litter with weeds and kale and sprinkled chick starter over it every day so she could teach the babies how to scratch. 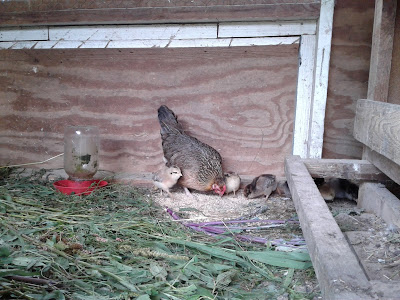 Here's a sweet video of the family:

Today she took them out of the coop for the first time, puffing up like a turkey when any of the other birds got too close to her babies.  Her little rooster was happy to see her and he joined in feeding and watching over the babies. 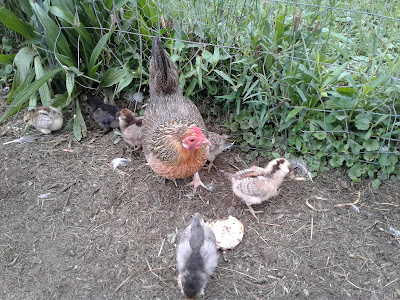 If there is anything sweeter than seeing a chicken hatch her own babies, it is seeing a bunch of incubator-hatched chicks meeting a mama chicken for the first time.  These little ones had never seen, heard or been comforted by a hen in the short time they had been alive.  But immediately upon setting eyes on this hen you could almost here them thinking "MAMA! Where have you been!?"  They all sleep in a pile underneath her, with just a beak or leg sticking out from under her wing when I check on them.  It's a really sweet sight.

Posted by Cottontailfarm at 9:41 PM