There are so many things going on outside our door; tiny lives that I'm sure are filled with their own beauty and drama. It's a good reminder to slow down and stop to really look at what's all around me. 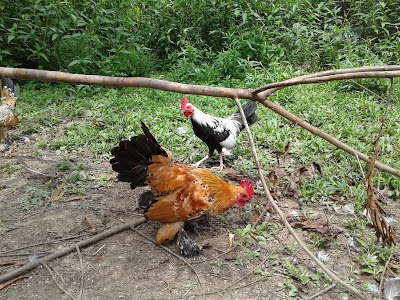 The bantam roosters from this spring are all grown up.  That beautiful orange booted one will get to stay here because he's an adorable gentleman but the black and white one will not.  He's just an ass; abuses the hens, picks fights with Nigel (who outweighs him by 10 lbs) and gives me the evil eye on a daily basis.  He's making everyone else out there miserable and he's smaller than a grapefruit. 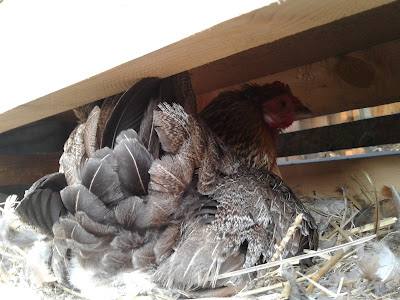 The south-bound end of a north-bound chicken.

This little lady has wedged herself under the nest boxes in an effort to be a mama again.  She's sitting on two eggs and both of the babies seem to be alive and well (there were originally 9 under her but none of the others were developing).  When they get close to hatching I'll call around to the TSC's near us and see what kind of baby chicks they have, buy a couple and slip them under her.  I did this last year, almost a year ago to the day and she was the best mom ever to those babies. She's worth her weight in gold to me.

But there are other small creatures around here too. 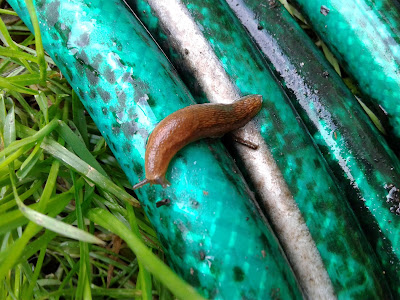 Like this little slug crawling over the garden hose.  Where is it going and why? 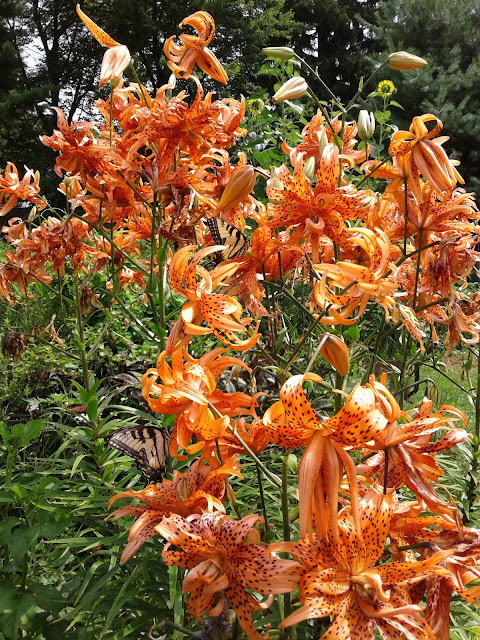 If you look closely, you can see the Tiger Swallowtail butterflies on the tigerlilly flowers.  How perfect is that? They love these flowers and there are anywhere from 2 to 4 of the butterflies on the flowers at any time.  They're so docile that the little man and I can catch them in his bug house just by herding them into it with our hands while they're eating.  His favorite part is letting them go. 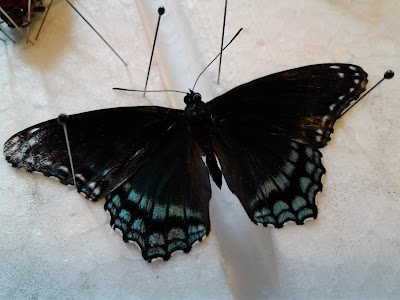 This little one didn't have such good luck.  I found it one morning, dead in a bowl of bubble soap that we had left outside while playing.  I think it is a Red Spotted Purple butterfly - the scales fell off the upper wings but I pinned it to dry anyway and will frame it.

Back in May I gathered praying mantis egg cases and put them in the garden for some organic pest control.  They hatched, and how.  There are mantises all over the place.  They're about 3 inches long now and a blend in with the plants perfectly.  They're absolutely fearless; the tigers of the garden. 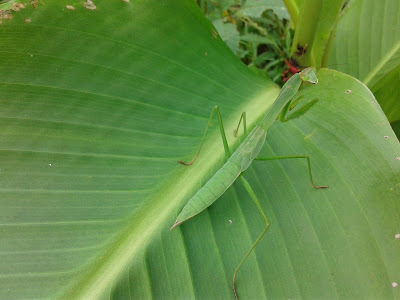 This one is staring straight at me - probably trying to decide if I'm edible. 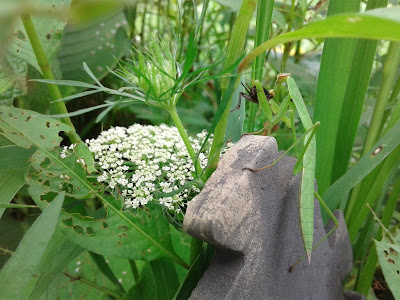 And here's one who has already caught dinner.  It's holding a (headless) cricket *shudder*. Everyone has to eat. 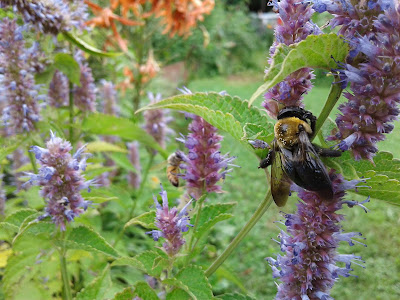 Pollinators are in love with the Anise Hyssop.  It's re-seeding itself every year and we're so glad - it's absolutely covered with insects when it's blooming.  The plant smells like black licorice.  I wonder of it tastes special to the insects too.  They really do seem to like it. 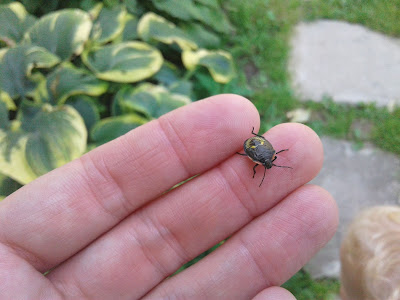 This summer has brought with it a whole new world of insect discovery.  My husband and the little man found this bug in the kid's wagon.  It had the shape of a stink bug, sort of, but also reminded me of a carrion insect.  Turns out it's a baby stink bug - the nymph stage - and will be lime green when grown up.  So many changes to go through and why? For what purpose? Who knew? 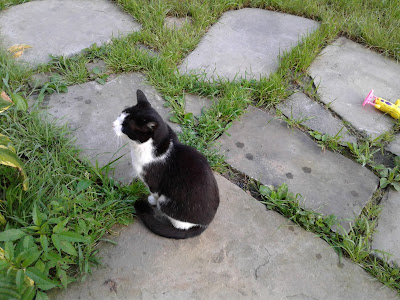 Bee.  My sweet Bee rarely even comes in the house anymore.  Maybe once a day to hit up the little man for some cat treats and then she's right back out the door again.  She used to at least come home at night to sleep but no more.  I suspect she sleeps in the shed.  The neighbors leave cat food in their barn so she might be sleeping next door, although she really doesn't like their cats (who are elderly and one with a lazy eye).  No idea what she does or where she goes during the day.  It would be really fun to strap a tiny camera to her head and find out but we don't have that kind of free time. The little man had a birthday last weekend and Bee brought 2 dead voles and a rabbit to the party. So she's hunting and having fun anyway.  She likes to lay on my chest and swing in the hammock in the evening and there's always a soft bed and cat food in the house if she wants it.

A small look at the millions of lives being lived right outside our door.


Posted by Cottontailfarm at 7:41 AM