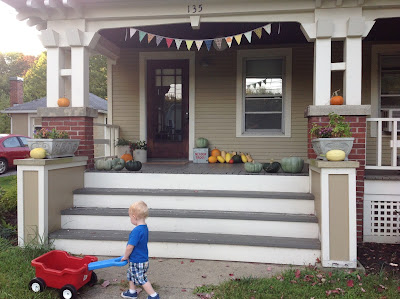 This year's winter squash. I think there are 25 total.

I rummaged through the garden yesterday and harvested all of the winter squash I could find. It really seemed like with as many plants as I set and how thick the vines were there would have been more out there but it doesn't look that way. There might be one or two still hiding in the asparagus patch but that's probably it.  As it is, since the garden was near totally neglected I think we did ok. Plus, look how pretty the porch looks!  I probably should have held off another couple of weeks to pick these but you do what you can with the time you have, right? 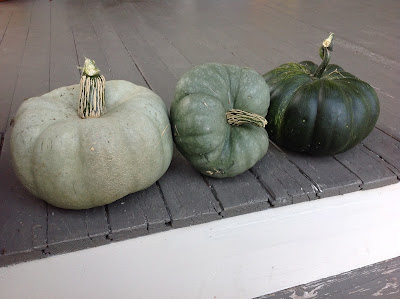 These are my favorites. I *think* that they are (on the right) either an immature Long Island Cheese or immature Musquee De Provence, the center one - no idea, the far left grew from seeds saved from that mystery squash bought last fall. 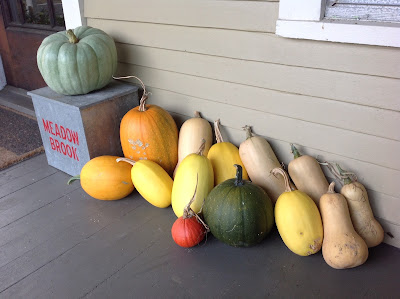 Very excited about all the Spaghetti Squash, it's delicious with just butter, parmesan and pepper.  The Butternuts are beautiful too.  Am I the only one that finds it impossible to say "Butternuts" with a straight face? Butternuts. Ha!

So I was going through all of my seed packets trying to ID the squashes (since nothing was labeled out there) and found something that made me smack my head. Ugh! 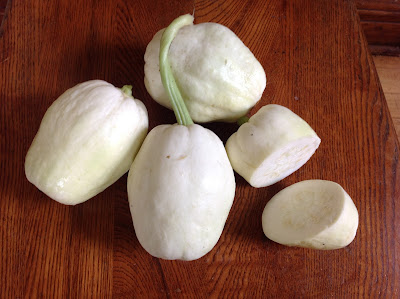 These were growing on a bush plant all summer and since they were right next to the Patty Pans I assumed that they were summer squash and I had planted some fluke seed that didn't breed true.  They had a weird airy texture and so I kept picking them off and feeding them to the chickens.

Apparently those were my Delicata squash and I fed about 20 of them to the chickens.  Makes me want to weep a little.

All in all I think we did ok and I'm grateful to have these to cook with.  This Dark Chocolate and Pumpkin Swirl Bread is just amazing and a favorite around here.  I also like to make a soup with winter squash, coconut milk and shrimp.

How does everyone else cook it?

Posted by Cottontailfarm at 10:55 PM