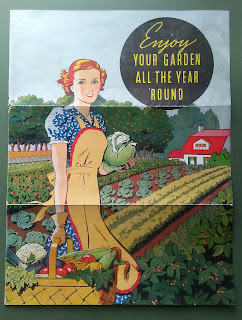 Isn't this old ad fantastic? It's getting framed for the kitchen.

Been canning for about 10 years now and just had my first "fail", sorta.  There were a bunch of "really gotta use 'em" ripe tomatoes on the counter and I had no free time so decided to split up the work by peeling them and filling the jars at night and processing them first thing in the morning. They were left out on the counter because I had added the citric acid already and why not. The next morning I put them in the canner and brought the whole thing up to a boil together. I thought I was really smart. 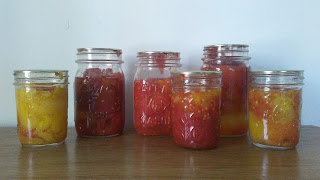 Can you see the problem? Hello, headspace?

When I filled the jars they had the proper 1/4 inch of "head space" at the top. What happened? The Ball Blue Book tells me that they are totally fine to eat (thank God because we're talking 7 jars total) and it probably happened because the fruit wasn't hot when I packed it. Somehow this caused a loss of liquid.

But I still don't understand "why". They weren't put into a hot canner cold. Where did the liquid go? Everything sealed and the jars aren't cracked. It is, as we say here "A mysterious mystery ". 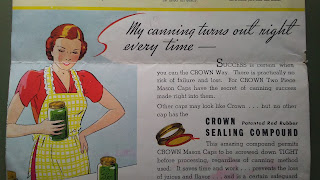 Anyone have a good canning fail? At least it's not like my pressure canner exploded or anything. Would you still use these?

Posted by Cottontailfarm at 3:07 PM