A goose accident, or not a good day for wussies

It's always something. Yesterday around lunch time I looked outside to see one of the geese sticking its head through the fence to sass the neighbor's cat. Totally normal around here. But then I looked out an hour later and it will still in the corner, just sitting there. Then it stood up and thrashed around and I understood why; it had its head stuck in the fence. I was home alone with a cranky, tired tot and had to call in backup before I could go outside and deal with it.

It wasn't good. Somehow the goose had gotten its head wedged very badly in ordinary 2x4 wire fencing.  There was a large cut to the neck where the fencing was embedded and it was standing in a puddle of blood. It had also cut the top if its bill. I ended up cutting the fence apart to free it. 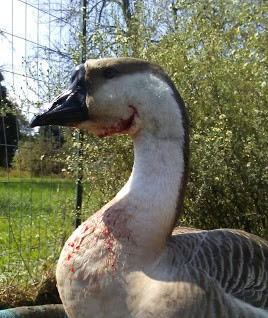 I washed the wounds, refilled the kiddie pool with clean water and put Blukote on everything. That's the extent of my first aid kit.  It slept most of the day and when I checked on it to make sure the bleeding had stopped I had to ease its head out from under the wing. There was no protesting and I took that as a bad sign. 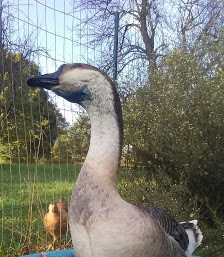 This morning though it seems to be fine. Eating, honking quietly and even stretching its neck to watch a flock of geese go overhead.

I was so upset when this happened because it seems like such a freak accident that I couldn't prevent. 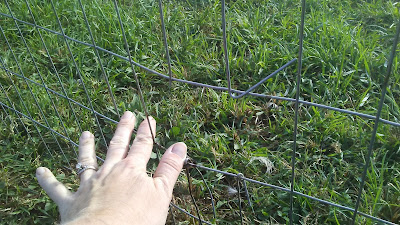 This is where I cut the fence apart - how on earth did it get stuck so badly? It should have been able to just slip its head right back out of the fence.

If we had been gone for the day that goose would have suffered badly and died from dehydration and blood loss.  This purebred goose is part of a trio that I have some time and money in. And although I have at least one pair out there if I had lost my only male/female it would have been a disaster.

It made me realize how woefully unprepared I am if this situation goes south. In none of my poultry books is there a first aid or "when the shit hits the fan" chapter. I have no idea what antibiotics are safe for geese or the dosage. I did post to an on-line forum asking for advice and was told to "take it to the vet". This isn't a diapered house goose and I'm pretty sure that no one around here would touch poultry anyway.  Worse case senario while I'm competent to kill chickens and ducks all day I have no idea how to put down a goose. I'm not physically strong enough to do it humanely and suppose it would have to be shot.

Everyday is an adventure and what a way to learn.

Also not for wussies; when I came in from treating the goose I looked out the window.  Whereupon I witnessed a goose getting it on with a duck and the chickens eating all of the bloody grass.  I may have gone blind a little and  immediately texted my husband and asked him to pick up wine on the way home.

This life, I'm telling you. Not for the faint of heart.

Posted by Cottontailfarm at 11:29 AM