Our Red Ranger hen has babies!

Congratulations to our Red Ranger hennie, who successfully hatched her first babies today!  When all of the other Red Rangers went to the butcher last year I kept her back just as an experiment.  I wanted to add her genes to the group to increase the size of the chickens we hatched.  She turned out to be a good layer of large, light brown speckled eggs.  Being a meat bird I never thought she'd go broody. 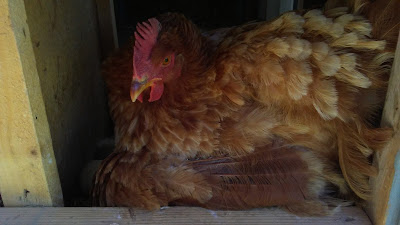 This is what's been greeting me for awhile when I lift the outside cover to gather eggs. Not a happy face.  When an egg broke under her I reached in to clean it up and received a peck so sincere it left a huge bruise.

She's done an absolutely excellent job sitting. Today when I went to check on her I found this: 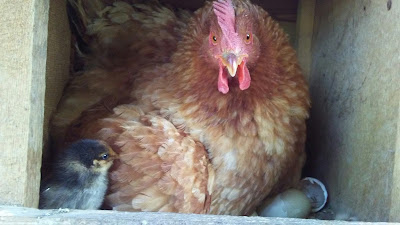 By this evening she had four healthy chicks under her.  A fifth had hatched but died.  I couldn't leave them in there main coop because the nesting boxes are several inches off of the ground so tonight the family was moved to the ramshackle A-frame overflow coop. If you ever have to move a new family by yourself, I did it by scooping up the hen (pecking and screaming her head off) and tucking her under my arm. Wear gloves and a jacket that pads your arms.  You will need it.  Then I gathered up the babies into a box making sure she could see them all the while cooing: "See?  Here's your babies. They're right here, you're fine, everybody's fine, blah, blah." It actually seemed to help.  She calmed down when she realized they were ok. 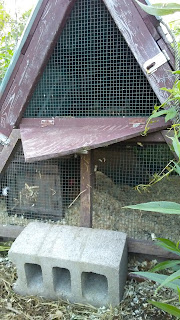 The hillbilly maternity ward.  This coop was given to us for free 10 years ago and is falling apart but has been a godsend more times that I can count.  I candeled all of the remaining eggs in the nest and only three were near hatching. They're in the incubator and if they hatch I'll tuck the peeps underneath her while she sleeps. Waking up with extra babies would be a helluva surprise for anyone.  Good thing chickens can't count.

The chickens are in the downstairs. What's that thing upstairs? 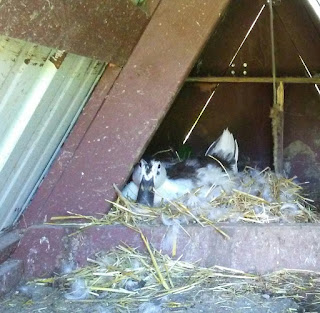 She's a cross between a Runner Duck mom and a Pekin dad, the little duckling who was raised by a chicken and once left out in the cold.  She has a beautiful nest and carefully pulls the feathers over the eggs to cover them when she goes out to eat.

We seem to have a ton of broody birds around here every summer.  Most all of the females here have set a nest of one kind or another.   I swear it's the result of our birds being almost semi-feral.  I mean, they're fed and watered and housed but for the most part they are just left to do their own thing.
Posted by Cottontailfarm at 12:12 AM