Happy belated Father's Day to all dads out there. If you're in the mood for a social justice Father's Day thought please click here. If not, feel free to continue on. But it's worth your time, promise.

This weekend my dad, sister and I took all three of the littles to the Thurston Classic hot air balloon race in Meadville PA.  It ended up being too windy for the balloons to launch but the littles were able to run around and watch a couple of the balloons inflate before we had to leave. 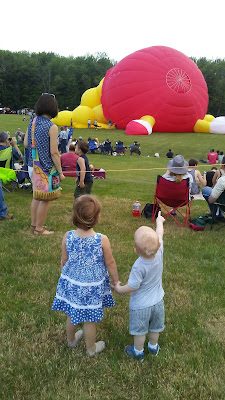 This one was shaped like a crab.  Cutest picture ever.

We had reservations at a local bar for dinner. The Safari Bar in Meadville is a place we've been going to as a family for many years.  There are a couple hundred pieces of taxidermy from all over the world, all collected by the owner. As someone who can't successfully shoot a deer during deer season it commands some respect.  I'm assuming all of these animals were delicious. 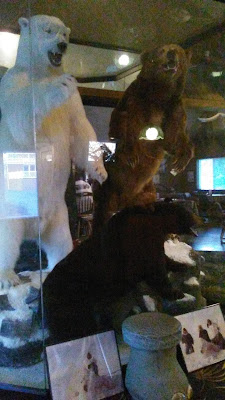 The bear collection greets you at the door. Polar bears are DAMN BIG, people. 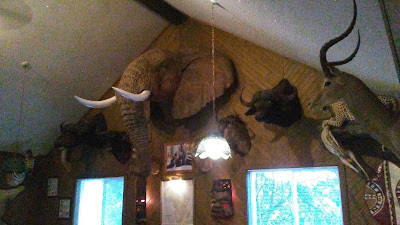 Yep, that's an elephant.  There's also a lion and zebra in that room. 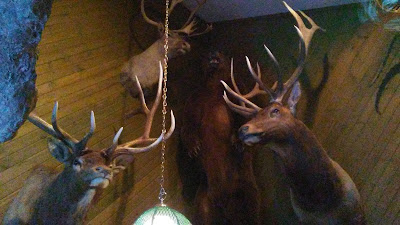 My favorite room.  It's mostly members of the Cervidae family.  The elk were magnificent.

I think all of the little people had a good time and the older people did too.  Excellent gin and tonics, by the way.

This morning I cooked a fun breakfast for my husband,  It stormed all day so our plans of biking were a wash. Literally. 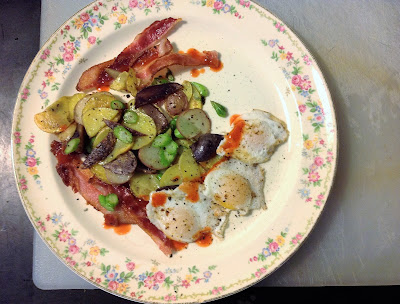 Bacon, tiny potatoes, asparagus and quail eggs.  Looked awesome but I think we were both hungry about a half hour later.

Oh, we also had a predator attack last night.  One of the chicklets from the Great Peep Hatch was missing from the chicken tractor this morning - all that was left was a pile of feathers.  There was also another bird with a small wound to the back of his head.  I put blu kote on it as a preventative but he's going to be fine.  I moved them into the old duck coop for safety today.  I am assuming we have yet another raccoon but should set up the game camera again to see what we're dealing with.  Damn raccoons are like the plague here. Of course the bird that was killed was: 1) a hen  and 2) a beautiful butterscotch color.  Like the color of an old-fashioned candy. We were going to keep her.

This week is going to see some poultry shuffling - the ducks and geese are being moved to the back pasture. I'm going to try to re-seed the garden pasture with pumpkins to try to salvage it.  Maybe a mixture of carving pumpkins - anything the kids don't decorate the geese and chickens will eat over the winter.  Garden plants are on clearance here already (not even a month after out last-frost date!) so if I can pick up cabbage for cheap I'll plant those for feed too.

There is a chicken mama expecting babies mid-week and quail eggs in the incubator due to hatch maybe Friday.  More is being planted in the garden, and being harvested.  I'll also talk about the berries that are starting to come in - currants and wild black raspberries!
Posted by Cottontailfarm at 11:12 PM