Otherwise known as "getting groceries the hard way".

It's been hot as blazes here but a really fun week nonetheless.  My dad called me the other day and asked if I could give him a hand with a swarm call.  We've been doing bees for... wow... 10 years now and these are always fun because you never know what you're going to find or how the evening is going to go.  This swarm was up in the crook of a branch about 15 feet off the ground and catching them was going to require a ladder and possibly cutting a branch.  I was eager to go because truth be told I've gotten a bit gun-shy around bees since I was attacked by a really aggressive hive a couple of summers ago (the only aggressive bees we've ever had the misfortune of housing).  So I wanted to go but was wary.  I swell up very badly when stung, to the point where my skin sometimes peels. The conversation that took place when we got to the swarm did not help and went something like this:

Dad: So what I need you to do is stand here and catch this branch when I cut it so it falls straight down.
Me:  You mean that branch with all of the bees on it? You want to drop it on my head?
Dad: No, I want you to catch it as it falls.
Me. (look, sigh.... shrug) alright.

Yeah, I didn't catch it.  We missed. But it worked out ok anyway. 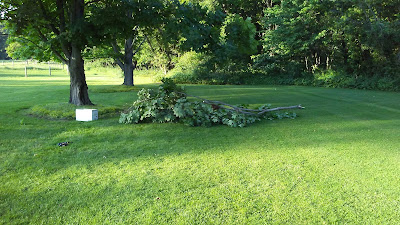 The bees are the dark lump in the center of the branch. 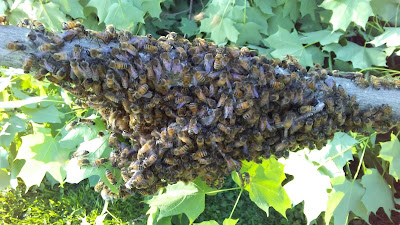 Here they are close up.  It wasn't a large swarm.  After a bit more branch cutting, running away (me) and waiting they were able to be shaken into the nuc box to take home.  The bees were incredibly gentle and patient with us the whole time. 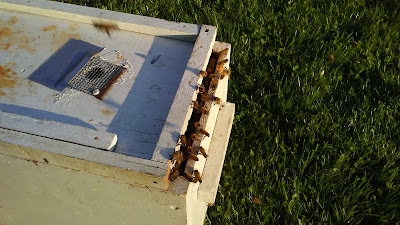 I don't know if you can see in the picture but the worker bees along the edge there have their butts in the air and are fanning their wings - a sign that the queen bee is in the box.  They are now set up in a hive box the apiary.

Last night we went fishing at my favorite river spot. The water was low with the heat and warm as bathwater.  It was a really lovely evening. 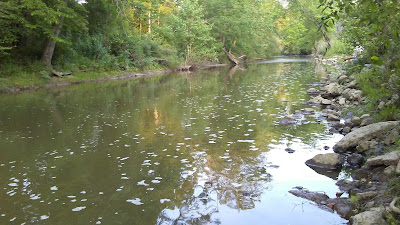 This time we had really good luck.  Three catfish on, a couple of small crappie and a rock bass. 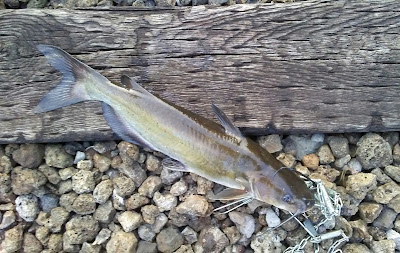 That's what I'm talking about.  Two really nice catfish fillets that my husband is going to put on the grill tonight.

Lastly, because it's so dang hot, pulled all of the remaining spinach, orach, and tatsoi from the garden along with some of the broccoli raab.  It would have most likely bolted this week with the heat and I wanted to try freezing it. 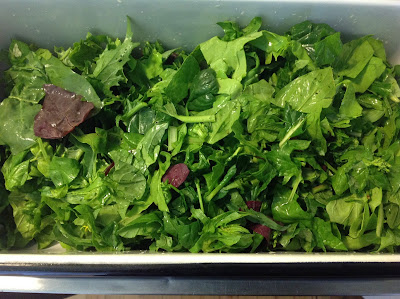 Washed and chopped, it was blanched in simmering water for 60 seconds.  It will be exciting to have greens during the winter when the local store produce is so bad.

Well, there you have it.  Fish, honey (hopefully) and greens. All local, fresh things to be grateful for.


Posted by Cottontailfarm at 3:00 PM