So, that other post I did - implying that our cats were not only lazy but also ineffective?  Yeah, I publically apologize to Bee.  Bee has been trying to get back outside since the day we brought her in as a stray kitten.  Every single day.  For six years.  And so we made the decision last week that Bee would be allowed to come and go as she pleased.  She's absolutely thrilled.  But I was not prepared for what happened today.


I heard Bee screaming her head off out on the front porch and went to investigate. 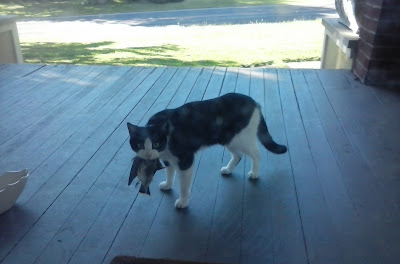 That bird is dead.  Real dead.  Bee demanded to bring it inside and tried running in between my feet. "Are you drunk?" I asked her.
I made a huge fuss over her and her prize and eventually got it off of her.  It was a Cedar Waxwing. We've never even seen them on this property and I have no idea at all where she found it or how on earth she snuck up on one.
Watch your backs, birds.  Bee's on the hunt.﻿
Posted by Cottontailfarm at 10:05 PM