The turkeys went to greener pastures two nights ago along with the lone duck.  At 8 weeks old for the duck it was an ok time to do it. 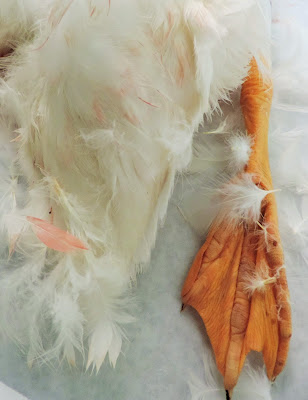 They sat bagged in the refrigerator and then next day I took care of them in my kitchen.  That isn't as bad as it seems.  It's about 100 degrees outside with 100 humidity and no way in heck was I going to stand outside and do it.  I've done the kitchen routine enough that it's pretty easy with minimal mess.

Here are some things I've found that are helpful: 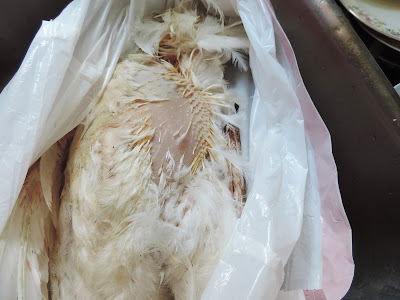 I was really happy with the way things turned out.

The duck, at 8 weeks, weighed 3 lbs.  It was a runner duck/pekin cross and mostly free-ranged.  Runner ducks are not meat ducks, so I wasn't expecting a huge duck.  Because it's so small I think I just might confit the whole thing.  Anyone have advice on that?

The turkeys, at around 10 weeks, weighed 7 & 8 lbs.  The were the industrial kind, broad breasted whites but I did not do anything fancy with their feed to encourage growth. They free-ranged like champs, ate every bug and green they could find and ran around a lot.  When I got up and personal with their crops, they were filled with about 25% feed and 75% clover and grasses.  I got them plucked mostly but will finish up before I package them. 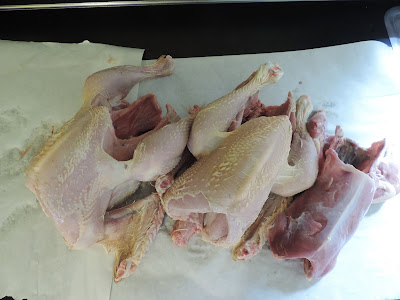 I am very proud that these turkeys had a better life than probably 99.9% of broad-breasted whites raised in this country every year.  They spent the time they had out in the sun, the rain and in the shade of trees.  They got to chase bugs, scratch and the dirt and be turkeys.

Posted by Cottontailfarm at 3:56 PM