Week in review - canning, rooster spurs, blackberry vinegar & other such

It's been the kind of week where we've been crazy busy but I don't really feel like anything got done.

I canned tomatoes.  It's the kind of activity that is disappointing and satisfying at the same time.  Disappointing in that buckets and buckets of tomatoes don't really add up to all that lot once they're in jars.  Canning heirloom tomatoes is different than canning paste tomatoes like Roma; you lose a lot of volume with the seeds and cores and whatnot. That's ok, the poultry eat all of the scraps and turn them into eggs.  But this is the satisfying part - the taste.  Wow!  It makes me so happy to pop one of these jars during winter.  The taste and smell are pure summer.  I canned a total of 3 quarts, 6 pints and 5 jelly jars. 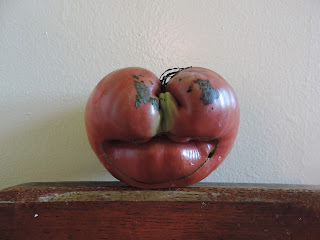 This Cherokee Purple tomato was spared.  He will sit in the kitchen and make me happy until he collapses from old age.

My final broody hen has babies.  I saw at least one pair of legs, duck, under her when I went out to feed everyone this morning.  I candled her eggs last Friday and she was down to 6 - 1 duck and 5 chicken.  So we'll see how things look tomorrow morning.  I really need to take a serious look around the yard soon and make some hard decisions about who to keep over the winter and who goes into the freezer.


Mr. Rooster Jr. is going to the freezer.  Sorry, buddy. 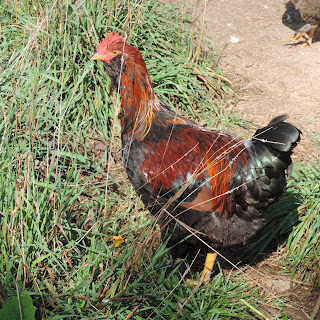 Trimmed the spurs on Mr. Rooster, Sr. He is... wow... 4 years old now and the one spur had actually curved around was threatening to poke his leg.  If you look on-line for information on how to deal with spurs people will usually recommend one of two methods that both sound insane.  1) sticking a cooked potato on the spur until it falls off or 2) twisting the spur off with pliers.  The first just sounds stupid and the second one really cruel.  If you ever need to do this I suggest dog nail clippers and sneaking up behind the rooster while he's on the roost for the night.  Both were trimmed and he barely noticed. Mr. Rooster is, let's face it, a pet and should be treated gently.

Cleaned the refrigerator out and found a pint of blackberry juice from jelly making pushed waaaay to the back.  Fished some of the "mother" out of a jar of homemade apple cider vinegar plopped it in the juice, covered it and set it on the windowsill.  It's starting to look like it has a jell on top so hopefully it will work.  I've never intentionally done this before.  Hopefully, there will be blackberry vinegar for salads next spring.

On the stay-at-home-mom front, I found that changing the lyrics from "Old MacDonald had a farm" to "Little Man's momma had her dream farm" make it much more entertaining for at least one of us.  We had a lot of spare time to fill that day.

Let's end with some dahlias in an old honey jar.  Happy weekend, everyone! 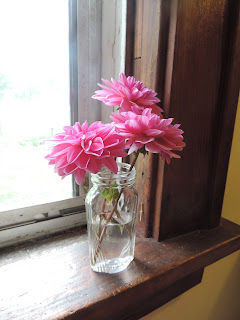 Posted by Cottontailfarm at 12:40 PM