Wow, that's an awesome post title. It was a whirlwind of a week.  Here's what happened.

Thanks to my dad, I checked one off of my "kick-ass rural fun" to-do list.  We finally went turtle trapping.  Dad is an expert outdoorsman and I have memories of turtle hunting with him when I was little.  I've wanted to go for a long time because it sounded like fun, plus I love to cook and turtle isn't exactly on the shelves at the local grocery store.  There is a season and regulations surrounding this activity; also you need to have a fishing licence.  Plus you will need to call around and find bait - in this case beef lung.  He set lines at a pond he knew about and I went with him to check them the next day.  Honestly, I would have been thrilled just visiting this place. 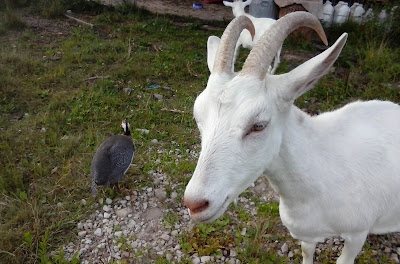 There were about a dozen goats, a couple ponies and guinea hens keeping us company. There was even a tiny bridge over the pond that the goats ran across. 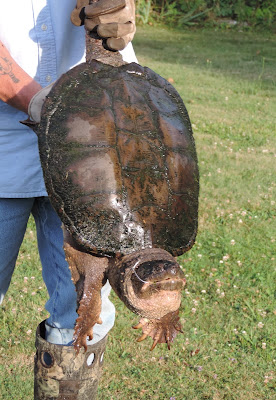 He was butchered the next day and put in the freezer.  My dad did a great job explaining all of the "how's" and "why's" of the butchering process and it was simple but involved if that makes sense.  Poultry and mammals are much easier anatomy-wise.  I would guess that we ended up with about 10 lbs. of meat.  Of course the shell was saved too.  I cooked the back straps (turtles have them between the ribs and shell) and they had the texture and flavor of, I kid you not, lobster. 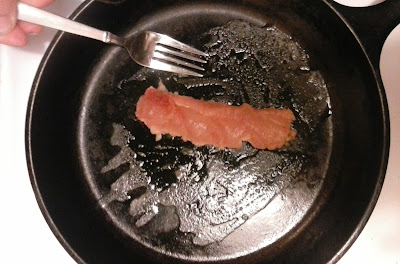 The rest was frozen to make soup this winter.  I have already titled that future post Turtle soup - aka "pond to table" eating in my head. 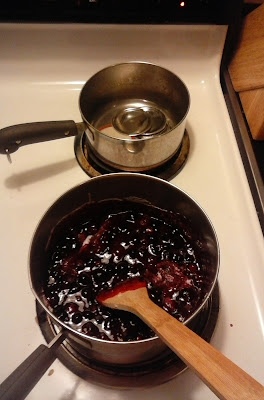 It's been an amazing year for berries - we have more blackberries than I can pick, and it's so hard to find organic jams/jelly around here.  I made a batch of blackberry jelly and added berries to half the batch so we also have some jam.  Then I made a blueberry-lime jam from the Ball blue book.  Not the "blue Ball book" as I have accidentally called it.

The tiny hen in under the cabbages hasn't hatched any eggs yet, but now we have another hen who has gone broody. 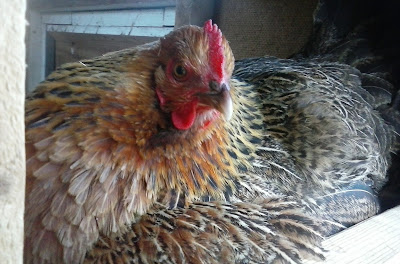 That is not a "happy to know ya" face

That's three in one season - we've never had any chickens do this before.  I wonder why?  We could use some new blood around here so I got in touch with someone I used to work with who has chickens and am picking up some fertile eggs tomorrow to set under her.  I'll keep a hen or two and any others will graduate to fajitas at the end of the season.

The building on the next-door property we bought was torn down.  When little man and I laid down for a nap it was still standing and when we woke up it was knocked down.  Kinda sad I missed the show.  It, and all of the trash that was in it, is still smoldering over there and think I heard the neighborhood cheering this week.  It had been an eyesore for years and years and was dangerous besides. Having it down really opens up the property.  Goats? Turkey farm?

Little man's birthday was this week.  I didn't know this before I had a child but his birthday was the best birthday in the history of birthdays.  It was so much fun.  We have a tiny house and it was going to rain so we could only invite a few people over.  I finished and hung my buntings, got balloons and made a  4 layer banana cake with cream cheese frosting  It was honestly the best day ever. 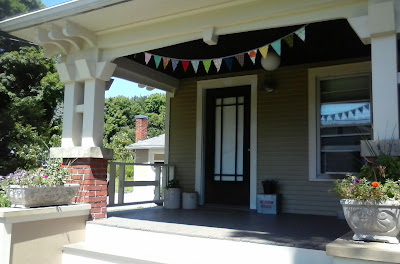 Well, that's it  Time to commit to a new week.
Posted by Cottontailfarm at 10:24 PM