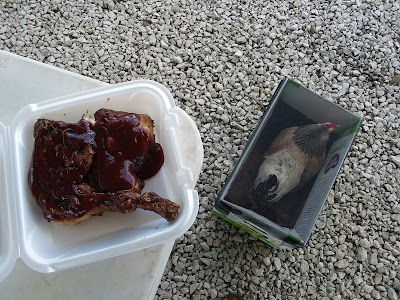 Is it considered animal cruelty to make the chicken you just bought stand in line with you while you buy hot off the grill barbecued chicken?

This Saturday was the big Amish benefit auction in Atlantic.  You can read about our previous Atlantic auction adventures here and here.

It was so much fun.  I went with my dad, we got there at 8 a.m. and the Amish outnumbered the English about 100 to 1, no joke.  There are so many people there from different communities.  It's just visually stunning.  The whole community of Atlantic was wiped clean of houses by a big tornado back in the 80's and now it's just beautiful  rolling fields with farms and draft horses and kids running barefoot.  We would have loved to have bought a house there honestly but prices are high for land and the Amish pay with cash. 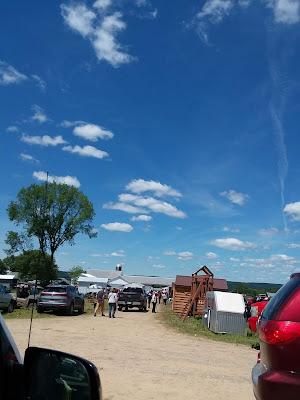 This was the kind of day we had for the auction, I mean it was perfect.  Hot but perfect.  My father and I do try to be respectful with our dress when going to this event; jeans, long sleeves.  I *know* that Amish in our area are worldly and buy their chicken nuggets and eggs and diet Pepsi at Wal-Mart along with everyone else, but still... it does feel better to dress the part and not take photos. But the things I wished to take pictures of... men hitching and test driving draft teams, a dozen Amish girls cooking pancakes on Coleman camp stoves, men and women in all shades of blue, children barely old enough to walk toddling around in suspenders and  a row of barefoot little boys leaning against a barn drinking Coke a Colas... I mean, the whole thing is beautiful. 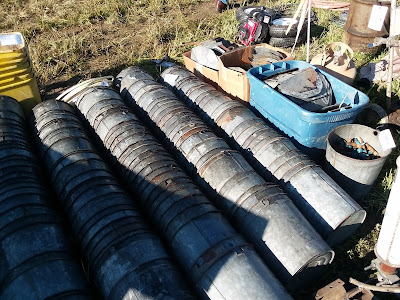 This was the one lot I was interested in, a whole sugar operation of sap buckets and lids.  But I was sure they would go for much more than I was willing to pay, only needing a dozen or so. Anyway, they were being sold at the same time as the livestock. 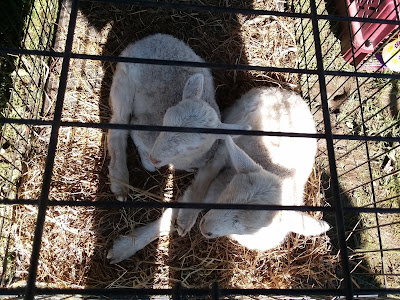 Which consisted of  a pair of bottle fed lambs (sad), lots of rabbits, chickens and a young goat buck being held in the arms of the seller.   I was interested in a cardboard box containing a beautiful hen with her babies... when the bidding got started, half an hour late,  I did get caught up in auction fever aka I've been standing here all damn day and am going to go home with SOMETHING . So I just kept my holding my number up out of stubbornness and spite . An embarrassingly large amount of dollars later we won the group of chickens.  My dad insisted on splitting the cost for the promise of free eggs  (which he gets anyway) but we did pay about twice as much as was reasonable.  I also intended  to bid on a tiny, gorgeous, grey/purple bantam rooster but when he came up for sale one of the auctioneer's assistants held up the box he was in and the rooster burst out of it like he was shot out of a cannon and ran off into the crowd. It was chaos. Picture a dozen English kids chasing a rooster around the barn yard. The Amish knew better; they were never going to catch it. It was perfect. "Well, that's that". I said and we all laughed. It was time to go home.

I collected my chickens, stood in line for barbecued chicken and we got in the van. 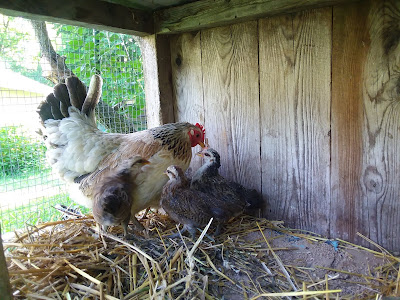 Here she is settled in with her babies. She is so pretty. She's somewhere in size between a bantam and a standard chicken, I'm guessing just a regular barnyard mix. 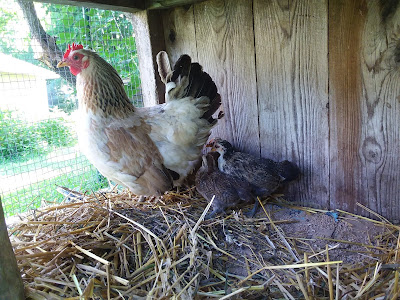 I'm going to overlook the fact that 4 of her 5 chicks look like young roosters.

And the pool party was for my little niece who turned 5. It was fantastically mermaid-themed and so much fun.  The community pool where they live is perfect for kids. There is a huge section where the water goes from a half inch deep to up to my knees in the "deep" end.  The oldest was so looking forward to the party that he wore his swimming goggles to bed last night and had the best day of his life splashing around.  The baby was so excited walking in the water that he would just stop to watch the other kids, squeal and stomp his little feet in place with joy.  Us grown ups were just grateful for the heat and the sun after such a long time of rain every day. 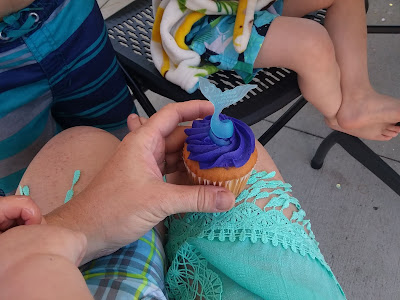 Mermaid rings on the cupcakes.  My knees, a baby on the lap, the oldest to the right and his cousin to the left.  Joy.

I did brave the humiliation of a bathing suit in order to take the oldest into the adult section to bob him around while he flailed his arms and pretended to be a beaver, then a sea horse. He adores the PBS nature show Wild Kratts so we were saying things like "Activate Seahorse Power!" which is what Chris and Martin say when they power up their creature suits.  It was the best and there was a lot of crying when it was time to go.  Afterwards we went back to my sister's where the oldest made crafts with the birthday girl and the youngest was snuggled by my nephew, who loves babies.

It's going to be hard to top this weekend. Truly, it was a great one.

Posted by Cottontailfarm at 10:33 PM