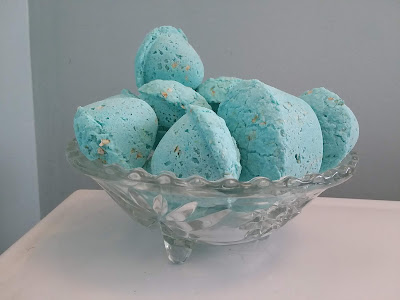 They look so sweet in this little cut glass bowl that belonged to my grandma.

So the kids love bath time and they love bath fizzies, or bath bombs as they're also called.  I used to love them too but don't take baths anymore since the faucet part that fills the tub rusted through, spouted like a geyser and had to be capped off (it was super expensive, purchased special order and less than 5 years old, no joke.  No one was pleased when this happened).  So now the old cast iron tub has to be filled by drawing the shower curtains and turning on the shower full blast.  I don't have time for this, but the kids do and so they're inherited my little collection of gifted bath fizzies.

They love them.  But the problem is that even cheap ones are $2 a pop and they're almost always made in China out of God knows what.

So last night, high off the success of the chocolate sauce, I decided to make my own.  A trip to the little thrift store produced a plastic thing-y for 50 cents that I think was intended to hold eggs in a refrigerator.   But, hey, it was 50 cents and these are being enjoyed by the littles not being sold at some fancy boutique.  I followed these directions from Popular Science.

it also calls for 4 oz Epsom salts.  I didn't have any.  They're not crucial to getting the "fizz" only the citric acid and baking soda is.  So I ground some oats in the food processor until it was a find powder and added 1/4 cup of it to the mix.  Powdered oats makes such a soothing bath for dry skin and the kiddos usually get this in the winter months.

So I chucked that all into the kitchen aid mixer and mixed it with the whisk attachment.  While that was going I put:

Into a canning jar and shook it up.  The instructions tell you to do this and it's a brilliant tip.  When it was shaken I added it to the running mixer in a very thin stream.  I didn't have any problems with the mixture foaming up at all.

Then I packed it into my thrift store mold as tightly as I could.  There was extra so I packed two muffin tin cavities as well. 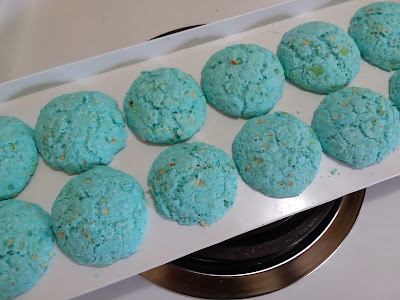 You can see that as they dried overnight there was a bit of a reaction that caused them to rise a bit, not unlike muffins.  I don't think there was anything I could have done to avoid this.

They were dry the next day and I turned them out easily. The recipe made 12 of the golf-ball sized fizzies and 2 muffin sized ones.

Tonight we used them in the bath. 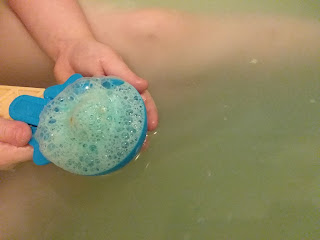 The cons: these aren't as concentrated as store bought ones so it took about 4 to have the same effect on the water color/scent wise as one store bought. Plus the kids just wanted to fizz as many as possible.

Pros: I think I can tweak the recipe to make it more effective, it only cost about $3 for the whole batch, the kids' skin felt amazing afterwards.  If I make them smaller then the kids can use a ton of them to feel satisfied and it will equal out to a couple of the larger size. Plus, I do not have to go to the store.

Going to call this one a win. A fun win.

p.s. I did not intend to store them in that pretty bowl because of moisture and the inevitability of kids chucking them into the toilet. They'll be kept in a lidded jar in the cupboard.


Posted by Cottontailfarm at 9:18 PM