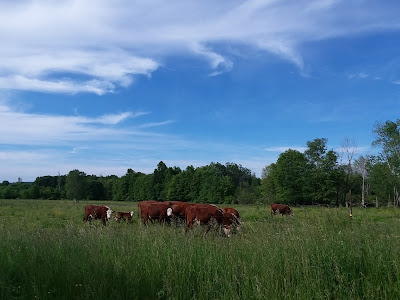 I was that weirdo in my car taking pictures of strangers cattle today. It was just a really pretty scene.

It's been a fun weekend.  Yesterday we had two parties to attend in the neighborhood; the neighbor's 6th birthday party (pirate themed, lots of fun) and a neighborhood block party. It was a really nice day and we had fun getting to know some new people.  I showed everyone the photo of the coyote that had come through.  The oldest has made quick friends with the neighbor kid, they're both super sweet little guys and get along great.... put them together and the plotting and planning of mischief quickly takes over.  It's adorable. 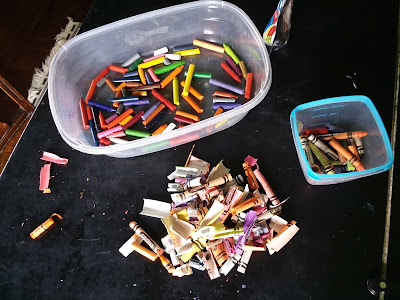 The kids and I made oven crayons today by taking the papers off of all of the broken ones crayons, chopping them smaller, filling a mini muffin tin and baking them. Sure, a pack of new crayons is less than a dollar but this entertained everyone for a full hour, myself included. There is something really satisfying about snapping crayons into tiny pieces.  My mother used to do this all the time with us when we were little.  I always thought it was thrift but now I suspect it was just that it got both of us kids to shut up for a good chunk of time. 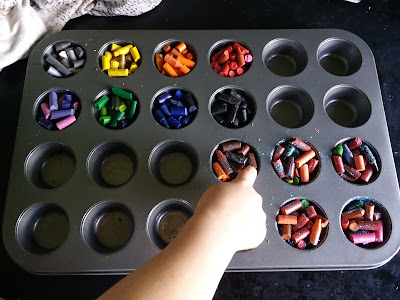 We sorted then into solid color groups and made some rainbow ones with the leftover pieces. We added some glitter to those. 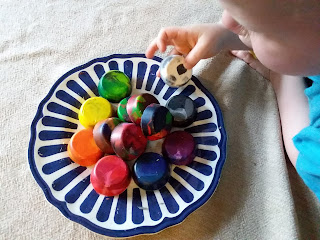 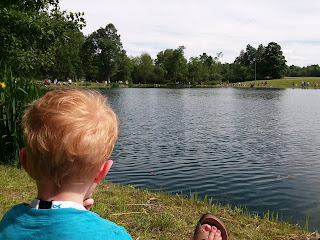 Later in the day the oldest and I went to a kids fishing derby for Relay for Life. There were probably 100 kids or more fishing. We didn't catch a single thing. After casting his line about three times he was pretty much done with it and on to obsessing over the cupcake stand. So we got a cupcake and a drink and just enjoyed ourselves. We had brought a net with us and found some water strider insects and this, the biggest aquatic snail I've ever seen: 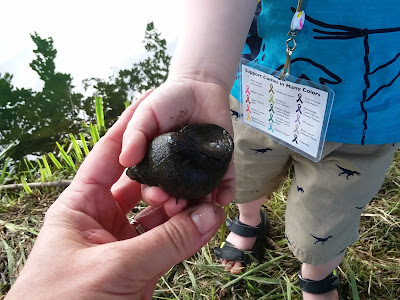 If we would have been anywhere else this thing would have come home with us for fish-tank observation but as it was we put it back.

It was so, so nice to spend some time with my oldest just the two of us.  Sometimes I really miss those days when we had undivided time together.  Although today I did jokingly question if he was my child.   The order of things he was interested in went as follows:

Cupcake stand
Port-a-potty (he's never been in one)
Gummy fish
Introducing himself to strangers
Lying on a blanket
Talking about dragonflies
Talking about bugs
and..... finally... fishing.  Waaaaay down the list. 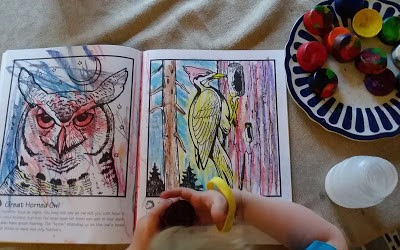 Then we came home and used our new crayons.

There were two things that happened over the weekend that caught me off guard.  One, at the neighborhood party the gentleman hosting used to work at the same place as my mom but retired opened with "How are your parents?" (Well, my dad's great and my mom died four years ago... so....)
Second, at the derby today the woman signing us in greeted me with "Oh, I had dinner with your parents yesterday!"  (Was a psychic involved?) She meant my in-laws but it still threw me off and the whole conversation was awkward.   I'm not trying to be sensitive, it was just bizarre.  We live in a small town and these conversations never happen - two in one weekend?  I mean, what are the odds?


The "what on earth do these peanuts plants remind me of?" mystery has been solved.  It was bothering me so I just started googling pictures of wild legumes and found this: 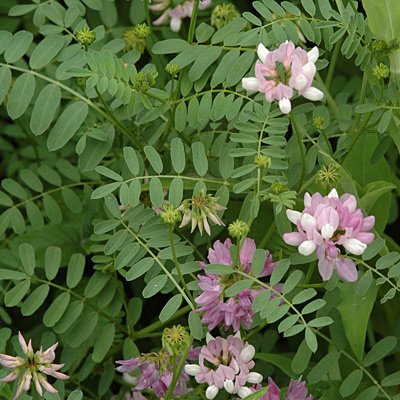 Crown Vetch.  We have the pink and yellow ones here.  They're legumes, related to peas and yep, most of the plant is edible.

Other fun things have been going on so the next post will be lots of pictures.

Posted by Cottontailfarm at 10:17 PM