Here's to loving another week

It's been a busy week.  Again, tired and wanting to get some stuff in my notes.  Here is some of what happened:

Garden: I know, I was supposed to do a big tour of this but didn't have time and it was too hot to be outside.  Things keep growing and we got some much, much needed rain today, plus it has been high 80's all week.  Damn deer ate the tops off of the pepper plants AGAIN.  I sprayed an organic repellent around the entire perimeter of the garden and around the peppers and beans.  Any other ideas?  Normally at this point we would be eating summer squash (yes), beans (eaten by rabbits) and snow peas (stomped by geese).  Have re-planted the peas and beans.  Here's hoping. What we ARE going to have this year - winter squash - I planted tons and a bunch of random volunteers are growing too.  Can't wait to see what ripens.  Also being harvested: potatoes, blackberries, blueberries, mystery apples. 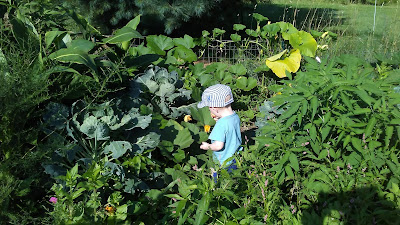 Eating an apple and checking out the vegetables.

Food Production:  I took birds to be butchered on Wednesday: that drake that had worn out his welcome along with three roosters, two of them were born here this spring - the mom a Red Ranger and the dad a Brahma.  At only 12 weeks old the carcasses were the same size as the rooster born a month earlier - a peep bought from the feed store - it quickly became apparent that they weren't Red Rangers as labeled but probably a production red breed.  Still tastes like chicken though.  Giblets are in the freezer - we love dirty rice and I'd like to try to make an authentic dish. Took the picture at night so the colors are sketchy.  Sorry.

I am very, very, proud of those two homegrown birds in front. That mix of genes produced a nice (small) bird for the table. and quickly. This might sound odd to some people but I think others will understand perfectly - there is a feeling that I have while I am driving birds to the butcher that can only be described as intense contentment and pleasure.  I used to feel badly on that drive but now it is a quiet time of celebration of a job well done and birds well raised.

So far this year I have put the following in the freezer/table: 12 chickens, 23 quail, 1 duck,  Have also sold exactly $100 in birds.  Hope to double the "meat" numbers by season's end.

Most of the week was spent sorting through belongings and pricing the unwanted stuff because our family had a big garage sale this weekend. I Marie Kondo'd the hell out of the house for it.  Vans worth of junk left this place - no joke.  Absolutely made bank of Friday and could not be happier about it. Saturday morning was cut short when a storm rolled in. I do not feel badly about a single item that was discarded - in fact, felt like it was easier to breathe with each box that left the house.  I think if I do this one more time before summer's end we will all be very happy with our living space.

Let me stand upon my soapbox for a moment.  If you, a grown adult, ever go to a garage sale on a Saturday morning and a 5 year old  child with a lemonade stand gets up the courage to politely ask if you would like some 50 cent lemonade? - and you say "no" -  It is my greatest pleasure to tell you this:  you are an asshole.  You are the kind of person who also walks past the Salvation Army kettle around Christmas and ignores the charity box at McDonald's.  My nephew was turned down by 3/4 of the grown-ups he asked.  I cannot tell you how many cups of lemonade and Kool-Aid I have bought off of little kids over the years.  But I CAN tell you that it is not about the effin' drink and if you actually want it or not.  Maybe it's just about being nice.  Maybe as an adult you shouldn't need me to tell you this.  At least his feelings weren't hurt.  Possibly because I bought the remaining 2 gallons.

While I was cleaning the house out I found these which I received as a baby shower gift and never used. 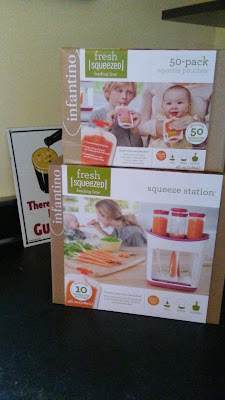 It packages 4 ounce portions and seems like it should be good from food preservation somehow but the only thing I can come up with is freezing pesto.  Anyone have ideas?

Since we were getting together as a family, I finally thawed out some of  that turtle we trapped last summer and made soup.  My dad wanted a cream-based chowder and this is what I came up with: 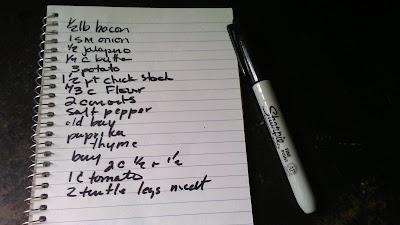 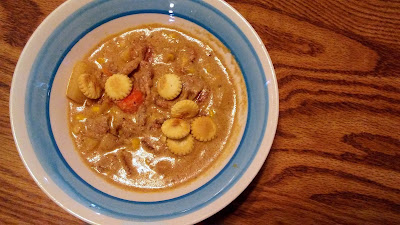 Two out of four people surveyed were not blown away by it.  It was very rich and flavorful but also kinda smoky tasting and the texture of the bacon turned some people off.  The problem is that the majority of turtle recipes aren't cream but tomato based.  I need to go back to the drawing board. 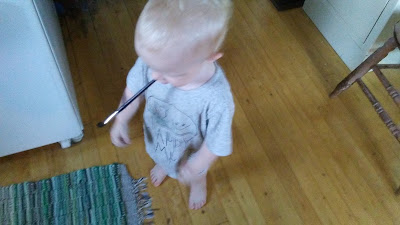 We also painted beautiful pictures today and then had a dance party to this song.  If the idea of a toddler dancing to Parliament Funkadelic doesn't warm your heart, I don't know what to tell you.  I've been blessed to see George Clinton live twice and he's absolutely amazing.  I didn't know this until right now - googling his age - TODAY IS GEORGE CLINTON'S BIRTHDAY!  He's 76 and still touring.  I must have seen him when he was 72 - 74 years old.  Both times he put on a helluva show.  As in, the stage show included dudes in roller skates and sequined chaps and I was a total embarrassment to myself and others . 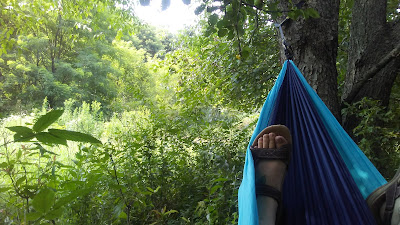 Also, a tiny little bit of this happened this week.

Next week's agenda:
Well, that's that.  Here's to living and loving another week.
Posted by Cottontailfarm at 11:43 PM