I'm going to have to make the garden tour a two part thing because there is just so dang much going on.  And, ironically, not a ton being harvested.  Well, here goes:

Remember that my garden is divided into three parts?  Here's an OK picture of how it's laid out.  That picture was taken in the spring when everything was newly planted and the world was fresh and mulched and weed-free.

The third on the far right is the "spring" side, the center is a poultry run and the left side gets planted later.  Today we're going to visit the spring side. 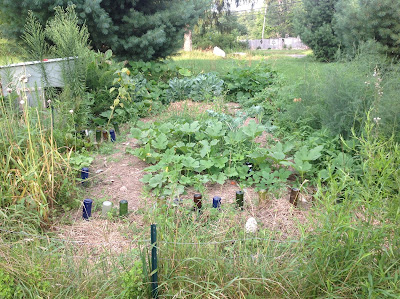 How it looks today. Let's take a tour. 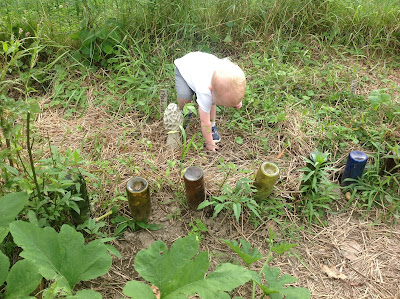 Stepping over the fence and into the garden you arrive at the potatoes.  Red Nolan and Yukon Gold.  They died back a few weeks ago and are ready to be harvested but I like to leave them in the ground for as long as possible.  I've been taking some here and there to fry with eggs for breakfast but that's about it. 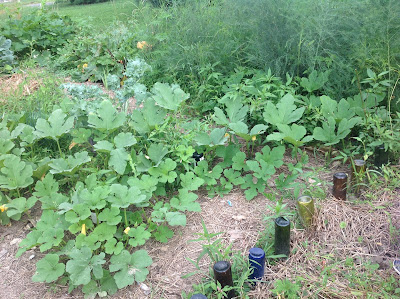 On the other side of the bottle fence is a big volunteer winter squash.  This is where the lettuces were planted earlier.  Some kale peeking out and to the right is the asparagus bed. To the left of the asparagus is rhubarb.  The squash is starting to fruit and they look like this: 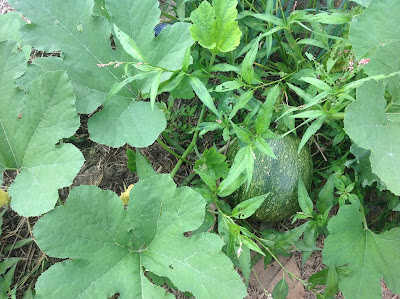 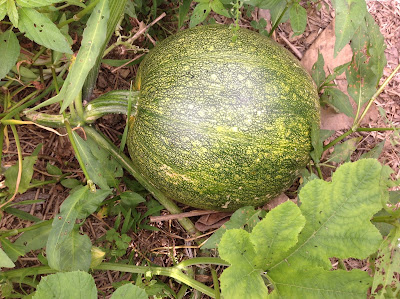 That sure looks like either a carving pumpkin or a sugar pie pumpkin.  I vaguely remember that we had some carving pumpkins last fall and I may have thrown the leftovers at the ducks  to the ducks at some point. So? 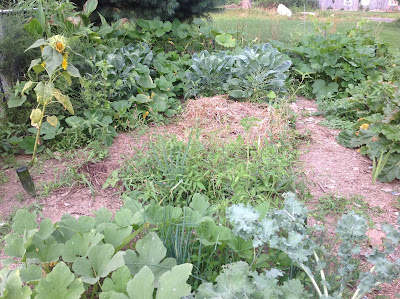 Past the mystery squash patch.  The green in the mid-ground is red onions that are ready to be harvested and dried.  The patch of straw past that is more potatoes. 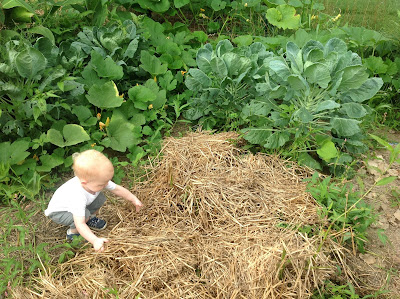 Here they are.  Directly behind them are Brussel Sprouts.  Behind the Sprouts are two zucchini plants along with these: 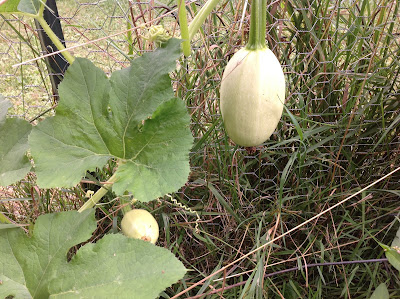 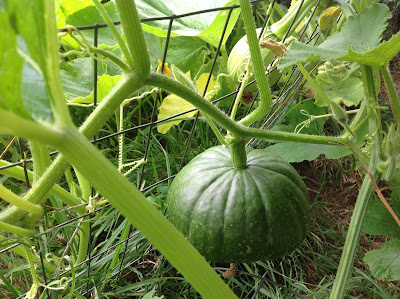 I actually don't remember what this is.  Australian Butter? 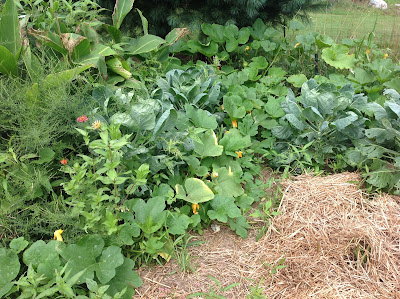 Coming back up the left hand side are more Brussel Sprouts, more winter squash (no clue, a lot of volunteers), some cannas, some zinnias. 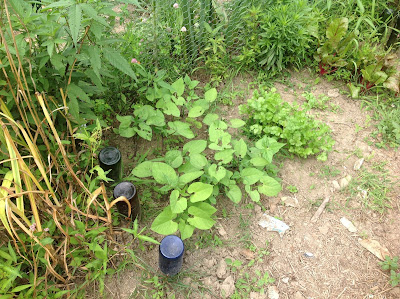 The Swiss chard hardly made any growth this season.  I did have fava beans, spinach and cooking greens over here too, earlier in the season.  Basil, cilantro and a mix of bush beans.  The brown stalks are garlic ready to be harvested.

Bonus: poultry pasture in the middle of the garden.  This was re-seeded after the geese and ducks were moved but has not really made much progress. Some buckwheat is coming up, cannas and winter squash. Towards the back left I planted the top of a pineapple to see ehat would happen.  I think it's dead. I'm thinking of tilling this whole area, planting winter wheat and moving the geese back closer to the house for winter. 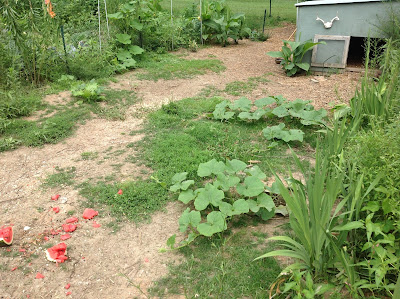 Stay tuned for Part 2, in which we see the left hand side of the garden and the back poultry run. Oh, the suspense!

Posted by Cottontailfarm at 11:08 PM