It's been a busy last couple of days.  Time to write down some things that I want to remember.

In the garden:  have given up on weeding and got out the push mower this morning.  Looked much better immediately.  Who cares, as long as it gets done, right?  This is about 1/4 of the "summer" side of the garden.  Have eaten some tiny summer squashes - zucchini and patty pan. 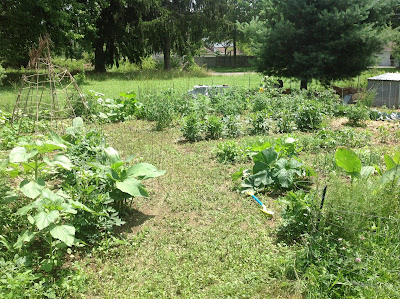 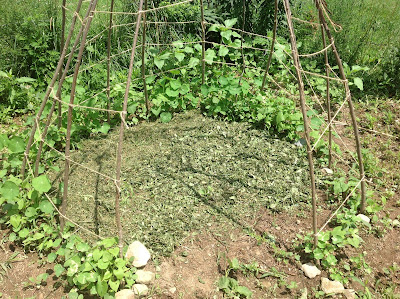 Here's the progress on the garden tepee for the little man.  I've planted it with nasturtiums, morning glory, moon flowers and snow peas. 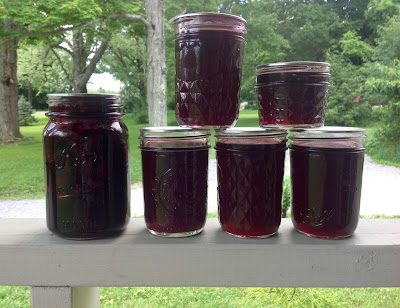 On the housewife/mom front:  Made the little man a cooking apron while he was sleeping.  Used a jumper for a rough "size/shape" pattern.  He's really into "choo-choos" right now.  Oh be still my heat.  It is so damn cute.

Jumper for size.  Finished apron below.

Been reading into the Montessori approach to childhood education, plus the fun Pinterest boards. Here we are learning to use a plastic knife to cut hard boiled eggs.  A knife?  He's not even 2? That's what I thought.  But given the chance to be a little grown up, with with real tools he did an excellent job.  We're working on cutting, transferring things to a bowl and using a masher. 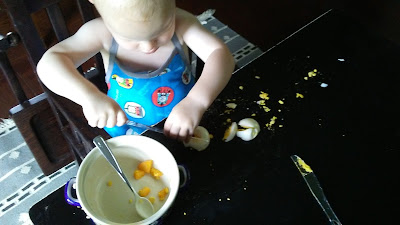 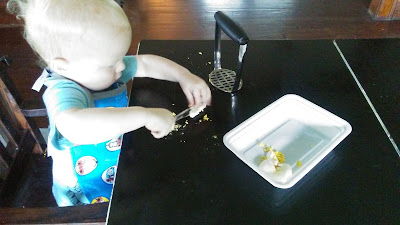 We also re-did his room kinda Montessouri-style to make it really "his" - put his little sofa in there with books beside it, added a tiny rocking chair, put everything at his level including a floor bed. Minimized the toys. We call it his "little apartment" and he LOVES it.  Especially the floor bed -  he can, and DOES go crawl into it now when he is tired instead of having to wait for someone to figure it out and help him into his crib.  Doesn't mean he stays in it all night, but still - this is brilliant. 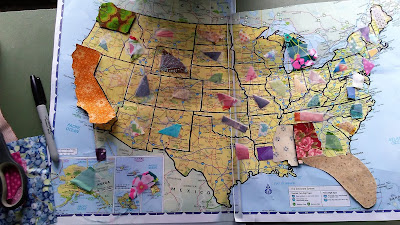 Started crafting a fabric scrap map, which has been tons of fun.  Requiring both a hot iron and sharp scissors, progress has been slow but the idea is to have a fabric map stretched over a frame to hang in the little guy's room. Happily chipping away at it.

Cooked a really excellent meal, leftovers really, and writing it down at the request of my husband. 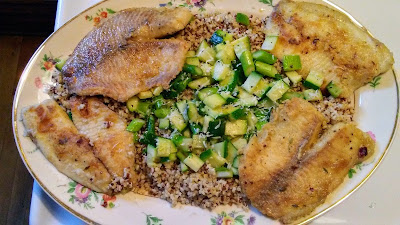 Meal #1. The first zucchini was picked along with a bunch of asparagus, these were sauteed with butter and lemon zest and set aside. The quinoa is from Aldi's. When the grains came off I added lemon juice and grated Parmesan.  The tilapia is just coated with flour and pan fried. 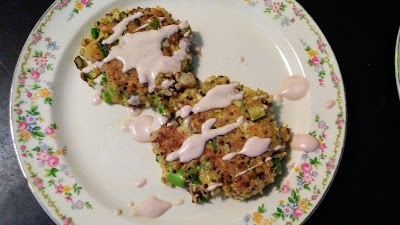 Meal #2 - the good one:  There was a grand total of maybe less than two cups of veg, grain and flaked fish left.  I combined that with a small handful of minced shrimp, more diced asparagus, lemon zest, pepper, Parmesan and an egg. A tiny bit of Old Bay. Worked a couple of spoons of flour in until I could form loose patties. Browned in butter they were crispy on the outside and tender when you bit through them, like a crab cake.  The vegetables gave a bit of crunch.  The sauce is just mayo, sriracha and worcestershire. These were damn good. Like, order it again at the restaurant good.

Picked up my fair book from the post office and am deciding what to enter this year.

Poultry:  The quail are in the quail tractor.
The duck that was attacked earlier in the week died two days later.
The fallout from this:
I've made an appointment to get that drake butchered next week. In addition to not protecting his ladies he has also, since then, STOMPED ON A NEST OF EGGS and injured my very last laying-aged female.  I've absolutely had it with him.  He's going along with a couple of roosters.  That leaves me with only two female ducks and a young drake. Having sold the Swedish two earlier in the spring the irony is not lost on me. BUT I am taking this as a sign to move to an all Pekin flock which will suit us more anyway.
I've been setting up the game camera every night trying to figure out what attacked us.  We are dealing with a minimum of two raccoons and one, possibly two foxes. 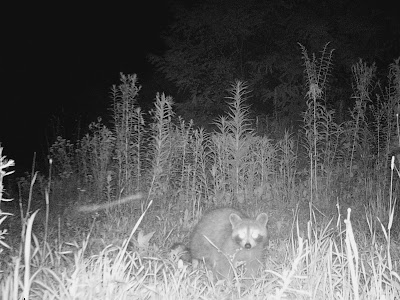 I still have a hard time believing that we weren't hit by loose dogs or coyotes.  I mean, ducks are kind of dumb but to hit FOUR in one night? I don't know.  You would think that whatever had a fun time/great meal would have come back for more and we would have gotten a picture by now.  Unless it was truly a raccoon/fox, who already hit us for one chicken earlier this summer.

Called today and placed an order from Murry McMurry for the week of August 20th - including 12 Cornish Cross, 2 Speckled Sussex hens and 3 Wellsummers.  Now that I've lost all of my laying ducks I need to plan ahead for enough eggs for the family come spring.  Really wanted to get some heavier birds - Cochins or Brahmas - but they are sold out of damn near everything for the rest of the season.  Oh well.  At least we'll have eggs and more meat in the freezer. We do have the peeps that just hatched but I'm not willing to rely on them not getting killed too.

Something good did come out of setting up the game camera: 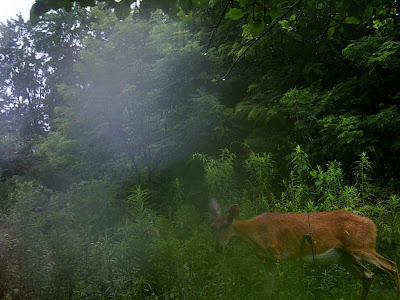 Our three-legged doe is alive and well. I was worried about her when I didn't see her this spring but here she is.  She looks thin but this is her injured side and she's always looked like that. Maybe she had fawns somewhere else and is just coming around now, I don't know.  But it made me happy she's still with us. Here's a picture of her last fall, and some more game camera snaps.

Little guy just woke up so signing off.  Sorry for any typos.  Next week - garden tour, more canning.

Posted by Cottontailfarm at 2:21 PM