You win one you lose one

So a couple of things happened yesterday while we were outside grilling dinner.  The first was that we had a domestic duck, a Khaki Campbell hen, wander into the yard.  The conversation that followed went something like:
"Um, that's not my duck?" I said to my husband.
"Which one, the spotted one?"
"No... That's ours. The really pretty dark one with the blue bill."

She is lovely, and really friendly.  One of neighbors a few houses down got ducks maybe four years ago.  A little flock of Khaki Cambells and Black Swedish.  They weren't penned or housed and it didn't take long before they started wandering the neighborhood, begging food, getting eaten by raccoons and hit by cars.  Pretty much they went feral.  I hadn't seen any of them since summertime and I think there were only two left at that point.

Then this little lady showed up yesterday out of nowhere, probably happy for duck company.  When it got dark I penned her in the garden with my flock. This morning they're all getting along like they've known each other for years.  She's currently napping in a pile with the rest of the ducks. 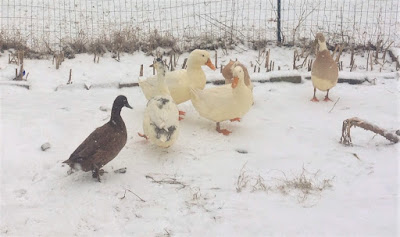 I should probably go knock on the neighbor's door. Or just keep her.

Also, while we grilling dinner, the new rooster beat up a couple of hens and then nearly killed my bantam rooster.  They got into a fight - not a kinda-adorable cock fight like we saw here, but a BAD one.  There was no posturing, no bluffing.  This guy was out for blood and I honestly think he would have killed the bantam had I not broken it up.  He had the little guy pinned in a nesting box and I was sure he was dead when I picked him up.  He wasn't but the big guy is about to be - as in he's getting whacked tonight. 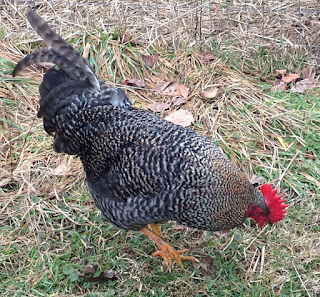 I'm sorry to say that his probationary period is up and he's getting roasted.  The hens are being abused, egg production is down and while he hasn't gone after any of us yet I can tell it's only a matter of time.  It's disappointing because I love to hatch chicks in the spring and while I've been trying to collect some to incubate -  production is so low it doesn't seem worth trying

I've been checking Craigslist for a free rooster and if one comes up near me I'll grab him as a temporary measure until I can raise up another Cochin.  I'd like to continue working for a self-sustaining flock of heavy weight birds, something that got put on hold when Mr. Rooster died.

It was 50 degrees yesterday and beautiful.  Today - more snow.  The daffodils are coming up along with the rhubarb.
Posted by Cottontailfarm at 3:16 PM