My little baker & a birthday cake

The little guy is 19 months old now and has turned into quite the little helper.  He insists on unloading the dishwasher, handing me each item to be put away.  He loves to sweep, shovel, throw things in the trash and is disturbed by anything that he deems to be out of place.

I don't know where he got this neat streak from.  Certainly not from his parents.

So I've been finding little things for him to do.  Lately I've been having him help make our bread. He stands on the counter and his job is to scoop the flour from the bin and put it into the mixing bowl.  I'm standing right up against him supporting him while he's "working" but other that, he has the satisfaction of doing it "all by himself".  The beauty about the recipe I use is that the amount of flour is totally negotiable.  If he dumps in too much I just adjust the liquid until the dough looks right. 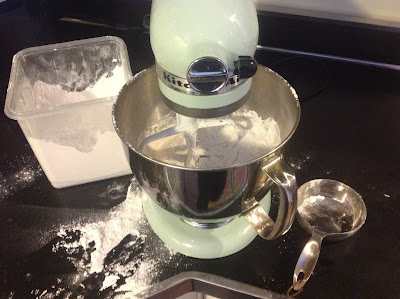 Footprints in the flour.

Here are the basics:
2 cups liquid (I use a mix of warm water and dairy - milk, yogurt, whatever)
spoonful yeast
spoonful honey
sprinkle of salt
roughly 3 cups flour (a mix of white, wheat, chia seeds, flax, whatever)

Chuck this all into the Kitchen Aid and turn the mixer on with the paddle attachment.  You want to adjust the dough for consistency (if it looks like batter - add more flour, if the mixer is really working-  add more liquid). Mix hard until you see strands of gluten forming - the dough will start to look stringy coming off the paddle.  Cover and let rise until doubled.  Preheat  a lidded cast iron pot at 450 degrees, pour the dough in and bake for 30 minutes. Take the lid off and bake for another 15.  That's it. 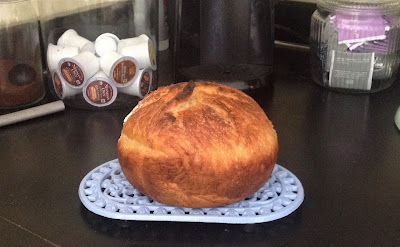 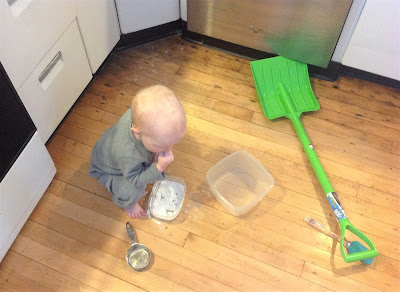 I also made a birthday cake for a wonderful friend who I've been blessed to know for over 15 years now.  Happy Birthday! It's the same
banana with cream cheese frosting  cake I made for the little guy's first birthday party. 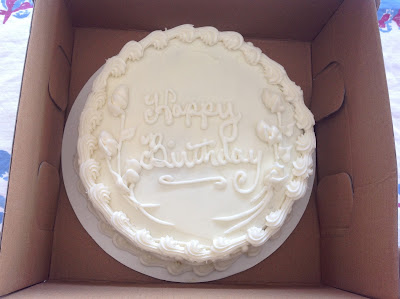 Posted by Cottontailfarm at 4:31 PM