It's been a heck of a past couple of days.  For starters, it's been absolutely beautiful.  Around 60 during the day and it looks like it will be this nice all week.  I've started to freshen the house a bit; hung the wool blanket on the line to air, took up the dining room rug and mopped underneath it and opened some windows.  Actually I am currently taking a break from googling "how to get a winter's worth of banana, baby food etc. out of a woven wool rug".  It looks like it's going to involve me and a scrub brush.  Hooray.

The little guy and I raked out a flower bed today, did some more pruning and put up the hammock my husband gave me for Christmas. The only tantrums this child ever throws are when he has to come inside.  He loves the outdoors so much, you would think we make him live in the basement the way he carries on screaming, attacking the door and crying angry tears.  We don't by the way.  He would happily live out there if he could - wind, rain or snow be damned and I don't blame him.  Me too, little one.  I get it.

Picked up a new rooster from a lady on Craigslist on Friday.  He's a Brahma and gorgeous.  She had the most beautiful flock of Cochins and Brahmas - nothing but feathered feet and fluffy butts everywhere.  The lady I got him from was very nice asking me on the way out to "please don't roast him" and "keep in touch". Um. Ok.  This weighed heavily on my mind because as soon as we got home I opened the box he was in to show him to my husband and of course he burst out of the box and took off running. Across the road.  Behind the neighbors house. I immediately had two distinct thoughts: That was stupid of me. and, more to the point,  I don't have time for this shit. 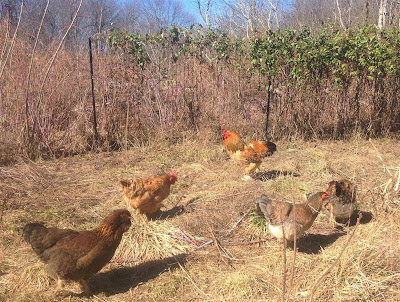 He was on the lam for two days.  At one point the lady sent me a text asking how he was doing and I replied that: Great! He was out free ranging! which was technically true.  We have three acres of heavy brush and woods.  I couldn't get near him or find where he was roosting so I devised a trap of sorts.  Hoping that he would appreciate chicken company I tossed our old dried up Christmas tree into the chicken yard, spread around two bales of straw and chucked a coffee can's worth of corn all over the place.

"Be on the lookout for a handsome stranger" I told the hens.  The goal was to get the girls to make as much noise as possible and it worked; within a couple of hours he was the gate talking to them and they were standing in a cluster on the other side of the fence with little hen hearts going pitter-pat.  They are all in loooove with this guy.  I'm going to take that as a good sign of his character. 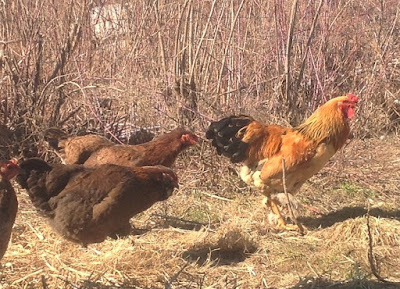 There's so much else going right now that I'll write about this week; garden plans & another poultry order coming.  But for now, back to housewife chores.
Posted by Cottontailfarm at 12:10 AM