An unexpected gift of quince

Quince are a bit of rarity around these parts.  There are old apple and pear orchards everywhere but quince not so much.  Not many people know what they are or what to do with them.  I absolutely love quince; their shape, the odd fuzz they're covered with and the way they perfume a whole room with the smell of pineapple.  I like that they are stubborn and have to be coaxed into being edible with a long slow cooking, and the bright pink color they turn in the pan.

There is a big old tree up by my grandparents' house that is overloaded with them most years.  We've been given permission to stop and pick them but there is another person who does this also and it's so late in the season I assumed I'd missed out for the year.  Not true; the other person had picked most of them but there were still some at the very top.  My father came over the other day and set some on my windowsill.  I smelled them before I saw them. 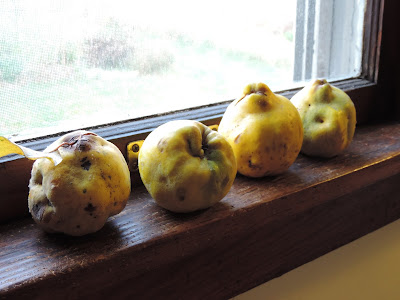 We spent some time visiting with my grandparents yesterday.  I took up some homemade bread for them.  A couple of weekends ago Grandpa had two heart attacks, one of which was a major one and his heart is functioning at about 30%.  He just turned 90 and is of a generation of farm men that were born tough.  He decided that everything the doctor told him is a load of BS and told me that he "didn't have a heart attack, he just had some pains" and is carrying on like nothing happened.  He mostly wanted to talk about gardening and the upcoming election.

It was a good visit.  Afterwards, we stopped by the tree with a bucket and an apple picker.  My father picked the fruits and I helped my little man walk them over and place (not throw!) them into the bucket. 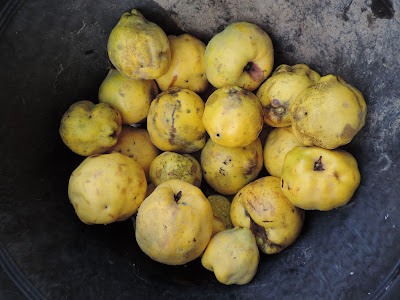 There were enough fruit left that I'm going to make a batch of quince jelly.  Also, I'd like to try making quince paste which is like a fruited gummy candy.  I guess it's hugely popular in Spain where it's eaten alongside cheeses.  If anyone actually reads this blog - have you cooked quince?

Posted by Cottontailfarm at 1:01 PM