It's been a week of buying and selling for me. Buying treats for myself and selling off things I no longer have I use for.

On the "buying" front I've found some real bargains this week.  Seed Savers Exchange was having a half off sale on select seeds so I purchased some I needed. 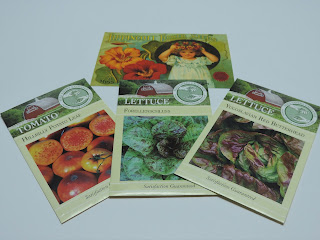 Not the best picture.  I bought two of my favorite lettuces that I realized I had poor germination on this year: Forellenschiluss and Yugoslavian Red Butterhead.  They are both sooo beautiful.  Hillbilly tomato was a new one I grew from a transplant this year and the tomatoes were flavorful and they were heavy producers.  And they threw in a free postcard! In adult fashion, I've updated my seed inventory

At an Amish-run resale shop today I found these treasures for the camper. 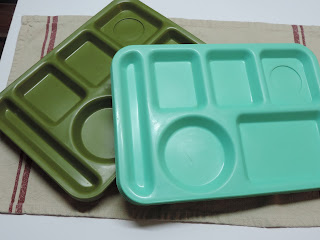 Eight vintage school lunch trays for $1.50.  Four of each color. Now mentally add hotdogs, smores and baked beans to this picture.  Awesome, am I right? 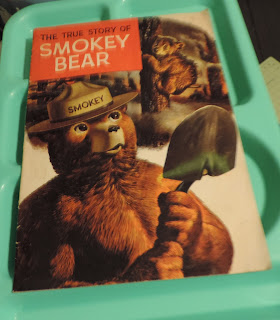 This Smokey Bear comic book was also $1.50 and will be framed and hung in the camper.  I remember a couple of years ago reading in Smithsonian magazine how once upon a time, in the 1940's, a young forest ranger found a little bear cub with charred paws crying in a tree after a forest fire had put out.  Its mother was presumed dead.  He climbed the tree, pryed the cub off of the branch and tucked it in his jacket.  He called the cub "Hotfoot Teddy" and the little cub eventually became a mascot of the U.S. Forest Service.  You don't get a better story than that.

On the selling front, I've come to the decision to sell off the rest of my video game collection. This was a hard one and hurts because in a way it feels like I'm selling away my early 20's. I've parted out some of my collection over the years but there's still a big pile of it here: Nintendo, Super Nintendo, Sega Genesis and Atari.... There is a box of literally close to 200 Atari games in the basement that are going to be sold as a group. And my Pac-Man arcade machine, that has to go too. 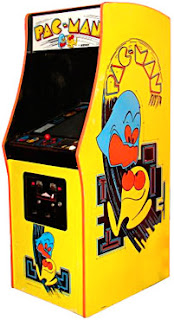 I literally have one of these out in the garage.

I'm slowly digging things out and getting them on Ebay.  I'm telling myself that if I really miss them that badly when the little guy is older I can always buy some back.  The arcade machine, though, that's going to be pretty irreplaceable.  I'm going to try not to think about it too hard.  Marie Kondo warns that getting rid of these things that fall under the "memorabilia" category of your life is the hardest part and boy she wasn't kidding.

So, things come and go.  Things change and people change.  It's all just a part of life.


Posted by Cottontailfarm at 6:32 PM