It was our first really cool morning here.  We had left a couple windows open last night and it was cool enough in the house for jeans vs shorts when I woke up.  I went outside to open coops and found something upsetting - the tiny duckling was hunkered down outside the broody coop door shivering.  Mama hen was sitting on the other side of the screen. He must have been left outside last night and I have no idea how that could have happened - it was dark when I went outside and everyone was already in for the night.  You can't exactly do a head count of peeps underneath a hen.  It took him awhile this morning to get his little feet back under him and so I got together a quick brooder in the garage to warm him up in but when I went back out it seemed like he was going to be ok. He was having breakfast and was able to keep up with his siblings. 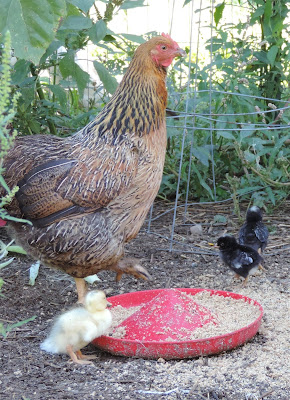 Everyone took a nap under mom shortly thereafter. 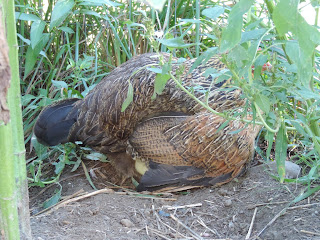 I'll keep an eye on him today but hopefully he'll be fine.  The poultry got kitchen scraps this morning along with their regular feed; some old sweet corn that was in the fridge and leftover salad.  Which they enjoy and turn into eggs.  Scraps which if, they lived in England, would be illegal to feed to them because they had passed through my own kitchen.  Thank you to Kev at An English Homestead for explaining this.  It blows my mind that food - inspected and deemed fit for humans - could be determined unfit for poultry consumption on the basis that it had entered my home.  What the hell indeed.

Speaking of poultry, there was some unused space in the garden this spring so I put in some feed again.  It was a very easy project last summer and the kind of thing that requires zero attention once planted.  They eat the grains, it gives them something to do, the stalks turn into bedding which then turns into mulch and compost. 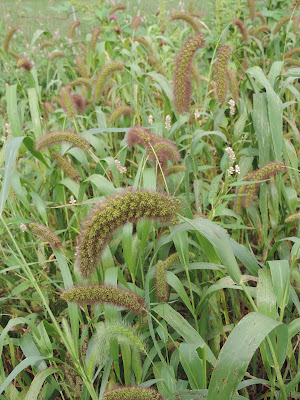 Lots of foxtail millet.  I honestly don't remember what this other one is.  Amaranth of some kind? 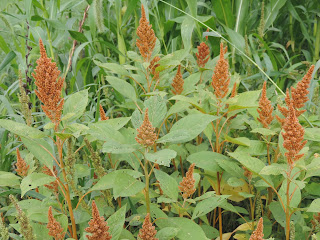 What else... I came to the conclusion weeks ago that the Shasta 1400 renovation is just going to have to wait until spring.  Finances are a part of it, along with the little man being so little.  The big thing is that there are too many decisions that I want to have made before I start repairs.  Like the paint color. That sounds silly but once I get the rails off and the windows out in order to repair the framing I want to be ready to paint each side of the Shasta before I add new putty and seal it back up.  So I need to decide on an exterior paint scheme.  I'm really leaning towards painting the stripes yellow like this picture I can't find a source to credit.  Husband really likes that traditional Scotty aqua color.  I have been painting swatches on the camper but haven't decided yet. 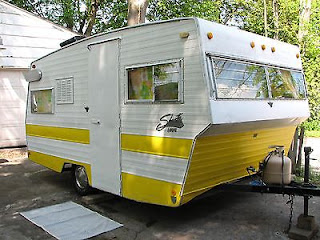 I also need to decide what I'm doing with the closet that I want to convert into a bathroom.  Here are the pictures. 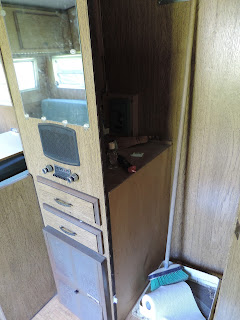 Looking left into the closet. We're not going to use the propane heater so I want it out because this will give us another foot of space but those drawers run the whole way back and I hesitate to lose that storage - also what will do with the front of the cabinet to hide the missing heater panel?  And I guess I'll have to move that fuse box and the old Ford radio unless I add some sort of interior shelf. 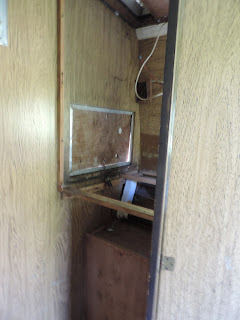 Here's looking to the right.  Plan is to move the horizontal bracing (where the icebox used to be) back a couple of inches so it's over top what I assume is the water tank inside that plywood box.  This will give us more "bathroom" space but I need to decide if I want to try to fit an icebox/dorm fridge in that space or just use our coolers in which case I could put up shelving.  Also, what to do with that missing vent that's currently covered with plexiglass and plywood.

So, I have a few things to work out in my mind before I start into the renovation.  But there's plenty of work that can be done over the winter; taking the doors off of the cabinets and painting them, polishing and repairing fixtures, replacing the zippers on the cushions. I'm looking forward to it.
Posted by Cottontailfarm at 12:22 PM