I know, it sounds bizarre and more than a little ick.  Tomato jelly?  That's what I thought too.  But I am here to tell you that this is the most amazing, delicious treat ever.  I wish I could pass a jar and a spoon around the internet so everyone could have a taste.  It's sweet. It's spicy. It's vaguely tomato-y. It has ginger in it.  It is pretty much perfect.

So I was looking at a small pile of tomatoes on the kitchen counter yesterday and was wondering what to do with them.  It's the end of the season but we're still getting some here and there because the heirlooms ripen over a couple of months.  I've canned plenty of tomatoes and we're eating them everyday already so... what to do with this handful?  To the Ball Book where I found their recipe for Tomato Jelly. I don't see where they have uploaded this one to their website, but I have two different editions of the Ball Blue Book and it's listed in both.

It's so, so simple: tomatoes, pectin, crystallized ginger, salt, lemon juice, hot sauce (sriracha) and sugar. That's it.  A very, very minimal amount of effort later I had this: 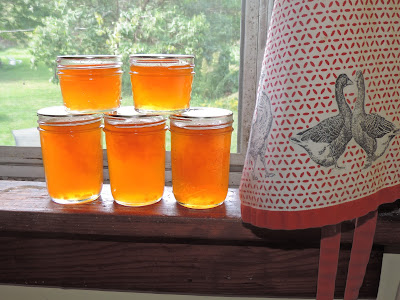 I made this with cheese plates in mind, but it's going to get used on everything: toast, cheese, roast chicken, sandwiches, whatever. There was a baby food jar's worth left over and I stood at the counter and ate most of it with a spoon. I should make more, it's not going to last long.

Posted by Cottontailfarm at 4:40 PM