Too early to be up

I've been up since 4 a.m. I don't know why I woke up, might have had something to do with a tow truck working up the road from us. I didn't see or hear any sirens though so if there was an accident at least no one was hurt.  When it was obvious I wasn't going to get back to sleep I waited until daybreak and went to let the poultry out.  The chickens were thrilled with last night's pizza crusts.  Mr. Rooster and the unnamed banty rooster have been crowing back and forth for an hour now, which I'm sure the neighbors appreciate.  They've gotten the whole hillside stirred up and two more roosters WAAAY down the road have joined in and one another street over. 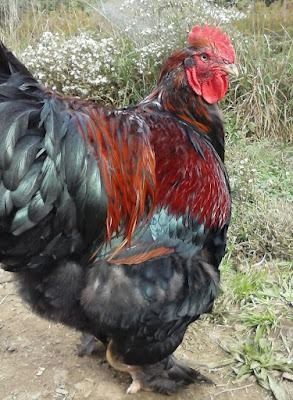 Isn't he beautiful?  And sweet.  This guy has a job here until he dies of old age.

The garden also got some weeding done this morning.  Japanese beetles were picked off plants and fed to the chickens.  The pepper plants the deer ate the tops off of never quite recovered so I think I'll plant new ones if I can find any left for sale.  I did notice a store advertising $5 flats yesterday so we'll see what's left.  Otherwise I'll hit up the farmer's market.  It's nice to freeze a bunch for the winter and not pay $3 each come January.

I was thinking more on the camper and what a mess the roof is what with the tar someone slapped all over it.  Here's an idea of what it looks like: 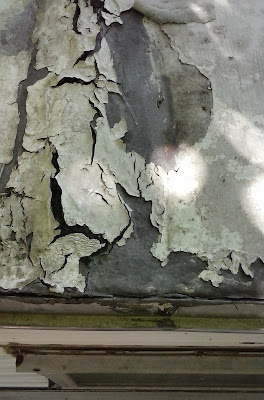 Yeah, that.  Does it get worse?

I've had a lot of practical advice on-line to just replace the roof.  Not happening. I don't have the money to do that and I have no interest in giving my husband a heart attack by declaring that I'm taking the roof off the camper.  I got out a putty knife the other day and started to scrape. 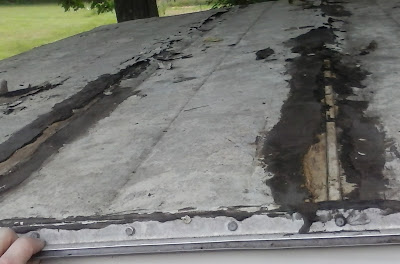 That's kinda looking better and didn't take much effort.  It's the kind of work that's meditative and you don't have to think about.  I read on a RV forum this morning that generic Cola and heat (like from a hair dryer) will take this stuff off?  I'm going to give it a shot.  It doesn't have to look beautiful, just keep the rain out.  It's going to be super hot today so I think I'll buy a bottle and pour it on and hope for the best.  I'll report back on how it goes.