Up early again this morning.  I snuck out of the house while the little guy was still sleeping in order to get some work done before it got hot outside.  My first objective was to check on the bees.  One hive doesn't look like it's changed at all since the swarm was installed in May.  There are literally four frames covered in bees.  That's nothing.  The second hive was bursting with bees, both boxes were full.  I called my dad to bring over a honey super, which I'll put on top of them tonight. I wonder if the small hive is just getting robbed out by the stronger one every day and can't get ahead? Or if something else is going on?

My second job was to clear out the part of the garden where the lettuce had been planted.  It bolted a couple of weeks ago and is too bitter to eat, so out it goes.  I filled the wheelbarrow and took it over to the chickens to scratch through.  I found some treasures in the row; three heads of lettuce that were tucked in the shade and still looked good to eat.  I dug out the volunteer potatoes that were in that row as well and had one with breakfast. 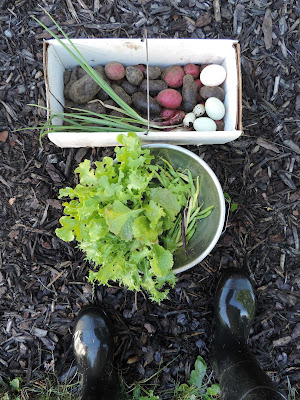 Who needs the grocery store?

The turkeys kept an eye on me the whole time.  They really are friendly and want to know what I'm up to when I'm out there.  They prefer foraging greens to bagged feed and their bug hunting abilities only seem limited by how high they can jump.  They're enjoying being alive and being turkeys.  The more I raise our own meat the angrier I get with industrial food production.

Now that the row's clear I'm not sure what to do with it.  More beans, or maybe the peppers I bought last week and haven't planted yet.

Here's a picture of mama cat and the kitten I've been calling "little chubs".  Since she's had the kittens, mama cat has killed 2 rabbits, 2 chipmunks, a cardinal and a mouse.  Good work, mama cat! 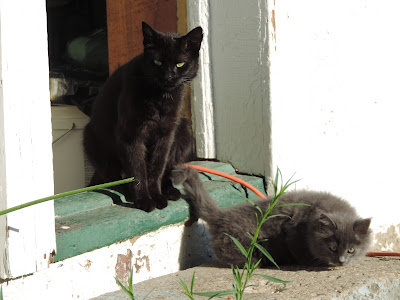 Posted by Cottontailfarm at 12:44 PM