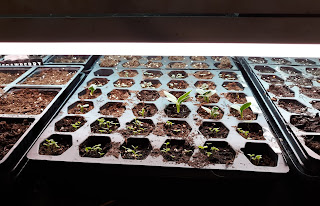 The garden is up and running. We have rhubarb sprouting and have planted potatoes,  peas, spinach, greens and radish. In the basement under lights I've started 2 kinds of alpine strawberries,  perennial flowers for the pollinators, ground cherries, chard, different kales, peppers and several varieties of heirloom tomatoes.  Also peanuts and lufa plants. I'm not sure the garden centers will be open this spring so better safe than sorry. 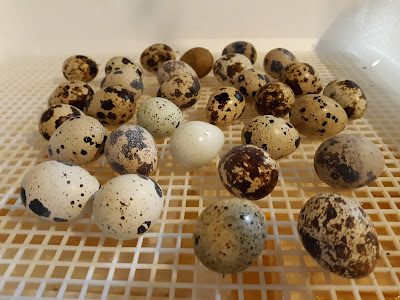 Also in the basement are 30 quail eggs in the incubator.  I bought the eggs off of ebay choosing a seller the next state over to ship. I left her great feedback because I've never seen anything packaged so well. They were double boxes, in foam trays and surrounded with packing peanuts. Unfortunately my egg turner decided to break so I'll be turning them by hand for the next 15 days. The quail are a color variety known as tuxedo that are quite pretty. I've never seen them for sale around here so hopefully they can both fill the freezer and bring in a bit of extra money. 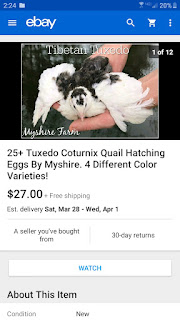 Here's what they should look like, in a couple of color ways. 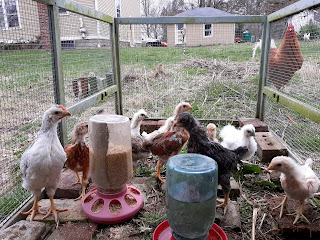 Here is Kwazi the rooster checking out his babies.  They are all his but the white and grey one on the left and the silkies. I only set blue eggs and he and my Easter Egger hen threw some really colorful babies. Unfortunately they look to be about 75% roos at this point. 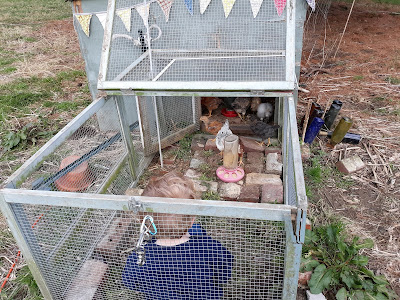 And here is the oldest making friends. Yes, he's in a chicken pen. And refused a bath tonight. Country kids; what can you do.

I've been trying to ramp up food production this spring due to, well, everything going on in the world. 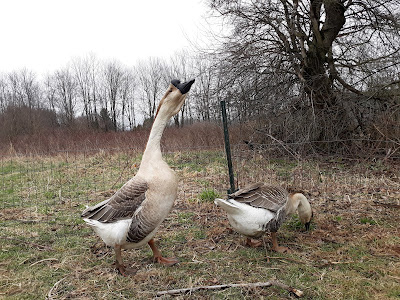 The geese have been allowed to keep their eggs but so far aren't sitting. We'll see. We aren't hurting for eggs, getting about 8 a day here, so it really doesn't matter not having them. I would however like another goose or two.  They've been enjoying the confines of a fence for a couple of weeks now after they decided to take a stroll down the MIDDLE OF THE ROAD. We live on a blind curve and I'm not having someone get killed because of these idiots. So, hello, portable fencing.

So that's what's new around here on the micro-farm front. I still have more seeds to do but I think we're off to a good start.